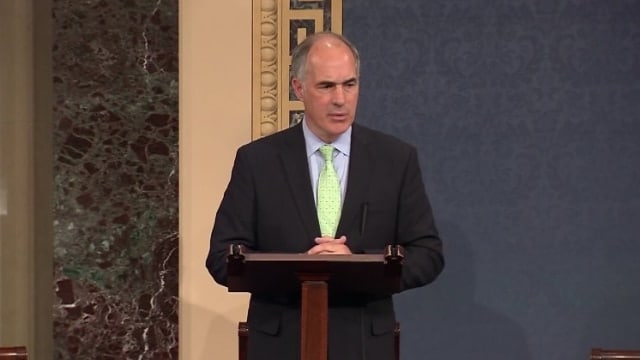 Congressional Democrats went on the offensive Monday in pursuit of increased regulation on firearms as an answer to the recent terror attack in Florida.

Spurred to action following the death of 49 at Pulse, a gay club in Orlando, over the weekend, lawmakers chided Republican leadership on the issue of gun control.

Each chamber of Congress began the day with a moment of silence for the Orlando victims on Monday. In the House, Democrats led by South Carolina Rep. Jim Clyburn — who has a number of gun control proposals gathering dust in committee — yelled immediately afterward, “Where’s the bill?” and “No leadership” to which House Speaker Ryan called order.

As afternoon stretched into night, Democrats delivered the first new legislation in the Senate, with Minority Leader Harry Reid paving the way.

“Republicans need to find the backbone to stand up to groups like the NRA and Gun Owners of America. Instead of pushing for more guns, maybe it’s time we make it harder for terrorists and criminals to get guns,” Reid said in a statement.

It was an ally of Reid’s, Pennsylvania Sen. Bob Casey, who then called for a revisit of a federal assault weapons ban, expanded background checks and no-fly-list restrictions then introduced the inaugural Orlando-inspired legislation — a proposal banning those with misdemeanor hate crime convictions from possessing or purchasing firearms.

“If you have proven you will commit criminal acts based on hate, you absolutely should not have access to a gun. It’s common sense,” said Casey. “It is time we as members of Congress do something. If you are a member of Congress and you say you care about security then you have to take steps to keep guns out of the wrong hands and ensure our law enforcement has the resources needed to keep communities safe.”

Casey’s measure, the Hate Crimes Prevention Act, would establish definition of a misdemeanor hate crime under federal law and ban the sale of firearms to those convicted of vandalizing a place of worship or assaulting someone based on their race, religion, gender, sexual orientation, gender identity, or disability.

However, the proposal’s applicability in the most recent shooting was dubious with even Casey saying on the floor that, “It doesn’t have direct application, obviously, to what happened in Orlando…”

Gun control groups were excited about Casey’s legislation, releasing a statement just minutes after it was introduced.

“In the wake of the worst mass shooting in U.S. history — not only a terrorist attack, but also an attack against the LGBT community — Senator Casey’s bill is a necessary step forward to make sure that individuals convicted of violent or threatening hate crimes can’t buy guns,” said Everytown President John Fienblatt in a statement emailed to Guns.com. “Congress should act to protect Americans from those who seek to do harm on the basis of race, sex, sexual orientation, religion, gender identity, national origin, or disability.”

In the House, Democratic U.S. Reps. Corrine Brown and Alan Grayson, representing South Florida, were making open calls for a ban on “assault weapons” in the wake of the Orlando shooting. Brown is set to join Texas Dem Sheila Jackson Lee in a bill to do just that while Grayson, as reported by FloridaPolitics.com, is working on one of his own and is throwing shade at gun rights groups over social media.

Elsewhere in the Capitol, Sen. Richard Blumenthal, joined by fellow Democrats U.S. Sen. Chris Murphy and U.S. Rep. Elizabeth Esty, held a press conference to announce a renewed push to pass stalled legislation to prevent those on terror watchlists from purchasing guns and explosives. They were joined in the call by Sens. Charles Schumer, Dianne Feinstein and Bill Nelson.

The Democrat-backed Denying Firearms and Explosives to Dangerous Terrorists Act of 2015 would refuse firearms background checks for those who appear on consolidated terrorist watch lists to include the no-fly list.

“If these assault politicians could get away with it they would define every gun rights organization a hate group and ban all their members and supporters from owning firearms,” Alan Gottlieb, executive vice president of the Second Amendment Foundation, told Guns.com. “How about we ban radical Islamist terrorists instead. Of course then you would have to admit that they exist.”