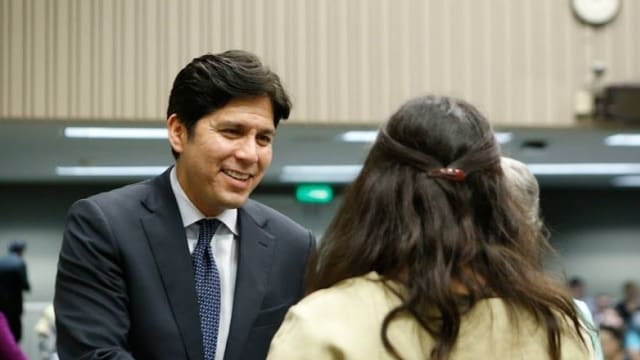 The host of proposals, six Senate measures debated in the Assembly and five Assembly bills likewise heard in the Senate, all passed in Democrat-heavy votes with witnesses from the Brady Campaign and Law Center to Prevent Gun Violence supplied by the bill sponsors.

The agenda was spearheaded by Senate President Pro Tem Kevin de Leon, D-Los Angeles, who sponsored several of the bills personally and is seeking to move the legislative package as a whole to Gov. Jerry Brown’s desk to beat Lt. Gov. Gavin Newsom’s pending gun violence ballot initiative to the punch.

De Leon kicked off nearly four-hours of testimony in the Assembly Public Safety Committee by speaking about his contentious legislation to regulate ammo sales in the state by requiring a background check and fee for every bullet purchase.

The measures heard in the Senate include:

AB 1673, which would change the definition of a firearm under California law to include, “an unfinished frame or receiver that can be readily converted to the functional condition of a finished frame or receiver.” Such raw components would have to be regulated in the state just like other guns including having a serial number registered with the Department of Justice, transferred through a licensed dealer, and fall under DROS fee schedules and waiting periods for first-time buyers.

Ting’s own AB 2607 would allow an employer, a coworker, a mental health worker who has seen a person as a patient in the prior six months, or an employee of a secondary or post-secondary school that the person has attended in the last six months, to petition the court for a GVRO. Under current law, only an immediate family member or a law enforcement officer may do so.

The proposals advanced in the Assembly include:

SB 880 aims to revise the definition of “assault weapon” to mean any semiautomatic centerfire rifle, or a semiautomatic pistol that does not have a fixed magazine but has any one of those specified attributes. As such, it goes after the long misunderstood “bullet button” by mandating guns with a fixed magazine would have to be disassembled to remove the magazine.

SB 1006 would establish a Firearm Violence Research Center at the University of California to study gun violence as a health care issue. The bill would require the university to report, on or before Dec. 31, 2017, and every five years thereafter, specified information regarding the activities of the center and information pertaining to research grants.

SB 1235 started off as a bill relating to public employees’ retirement but was rewritten by De Leon as a mandate to adjust the state’s definition of what constitutes ammunition as a result of the Parker lawsuit which repealed the Senator’s AB 962. Signed into law by Gov. Schwarzenegger, that bill required the licensing and registration of handgun ammunition sales and even threatened some reloading components as well.

SB 1407 is a reboot of De Leon’s infamous ghost gun legislation of 2014 that was vetoed by Gov. Brown. It would require a California Department of Justice Bureau of Firearms background check and authorization before assembling a firearm in the home of a state resident, which in turn would have to have a serial number. Additionally, before this could be granted, the candidate would have to show proof that building the gun would not violate local city or county codes. In effect, adding multiple layers of regulation to a process that is already legal under federal law.

SB 1446 would revise the state’s definition of a high capacity magazine to forbid those capable of holding more than 10 rounds of ammunition, including grandfathered magazines. Several similar laws have popped up around the state backed by municipalities in recent years. Brown has vetoed comparable legislation in the past.

Gun rights groups including the Firearms Policy Coalition, Gun Owners of California, California Rifle and Pistol Association, California Waterfowl Association and the National Rifle Association have opposed the legislative package. Testifying in front of committee, they argued that the proposed legislation will cause “drastic and unjustified restrictions” on law-abiding citizens with no impact on crime.

In the end, those arguments fell on deaf ears, will all measures passing.

“Anti-gun legislators have ignored every rule of ethics and decorum in order to advance their agenda. They’re releasing criminals from jail to make room for the law abiding gun owners their policies will seek to lock up,” Craig J. DeLuz, director of communications with the FPC, told Guns.com on Tuesday. “What’s worse is that they are utilizing tragedy to pass laws that will create more victims by disarming those who want only to defend themselves and their families.”