Supporters raise over $4.1M in 2 days for Orlando shooting victims 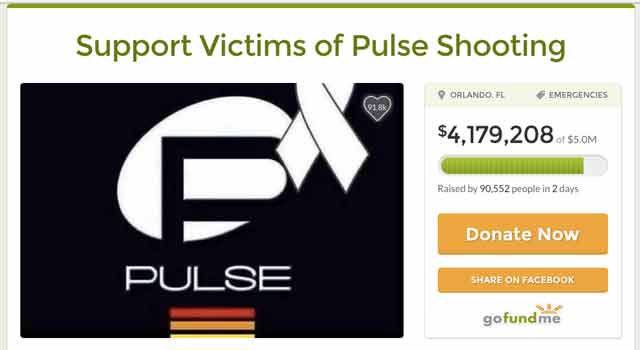 The deadly shooting at an Orlando nightclub early Sunday morning, which claimed the lives of 49 victims and resulted in 53 injured, left a nation mourning and the world in shock. But out of the tragedy came a tidal wave of support.

Without immediately knowing the extent of their injuries – or the cost of their medical care – Equality Florida, an LGBT equality and civil rights organization, created a Go Fund Me account to raise money for the surviving victims.

In just two days, the fundraiser has raked in nearly $4.2 million – and the number continues to grow. In fact, the site has been so overrun with traffic, at times, the website’s server has been unable to keep up and those visiting the site simply get an error message.

“We are beyond moved by the support from all corners of the world and all walks of life,” the group said in response to the overwhelming support, noting that donations have come in “from average Americans, large corporations, celebrities, musicians, artists, and political figures.”

“Your support demonstrates the incredible good in this world,” they added. “Thank you for your contributions.”

Additionally, several more campaigns have been started for families of the deceased victims.