NRA to Trump: 'No guns for terrorists,' but due process first 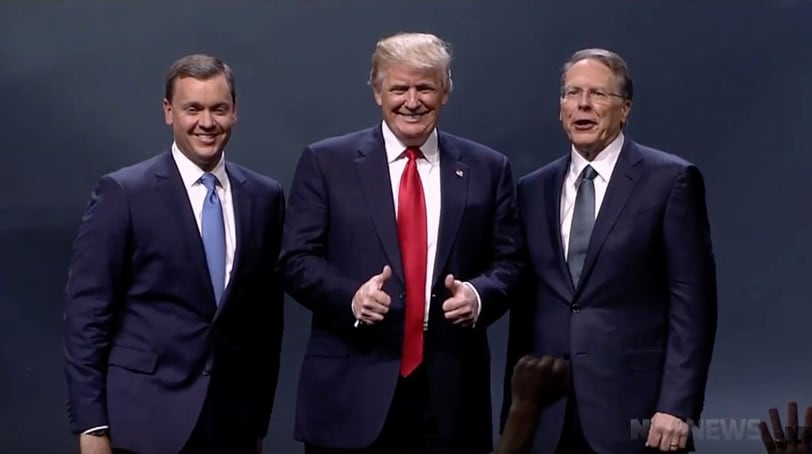 Republican presidential candidate Donald Trump on Wednesday said he would meet with the National Rifle Association to discuss the terror and no-fly watch lists and preventing those on them from purchasing guns.

I will be meeting with the NRA, who has endorsed me, about not allowing people on the terrorist watch list, or the no fly list, to buy guns.

Though the NRA came under scrutiny because it opposed denying guns to those on the federal government’s list with suspected terrorists links and later stated it supports keeping firearms away from terrorists, the group maintains it has not changed its position. The NRA also said Wednesday it would be happy to meet with Trump, who it endorsed at its annual meeting last month.

“The NRA believes that terrorists should not be allowed to purchase or possess firearms, period,” the group said in a statement. “Anyone on a terror watchlist who tries to buy a gun should be thoroughly investigated by the FBI and the sale delayed while the investigation is ongoing.  If an investigation uncovers evidence of terrorist activity or involvement, the government should be allowed to immediately go to court, block the sale, and arrest the terrorist. At the same time, due process protections should be put in place that allow law-abiding Americans who are wrongly put on a watchlist to be removed.”

No guns for terrorists. Due-process for law-abiding citizens. https://t.co/Qw4nzew4ZZ pic.twitter.com/zi8WlUcJee

Trump first announced a meeting with the NRA to figure out how Americans can best arm themselves against terrorist shootings like the one that claimed the lives of 49 people and left 53 others injured in Orlando on Sunday. It was the largest mass shooting committed by a single gunman in U.S. history.

Despite having previously been investigated by the FBI, the Orlando gunman was able to legally obtain his firearms. Trump blamed the shooting on the Obama administration and Hillary Clinton for failed foreign and national security policies that allowed for the killings and permitted the shooter’s parents to enter the U.S. from Afghanistan before he was born in New York some 29 years ago.

Trump’s platform has called for the banning of Muslim immigrants until it can be determined how best to deal with the threat of “radical Islam.”

Gun control group Everytown for Gun Safety responded to Trump’s statement, saying it hopes for a “meaningful proposal, not another red herring” to come out of his meeting with the NRA.

In a statement Wednesday, Everytown President John Feinblatt said that everyone should work to close what’s been called the terror loophole or terror gap, which has allowed people with suspected terrorist ties to purchase guns more than 2,000 times since 2004.

“If we had closed it already, we might have prevented the Orlando shooter from getting guns,” Feinblatt said. “There have been real ‘Terror Gap’ proposals on the table for nearly a decade. Both the Bush and Obama Administrations have endorsed them. And yet the NRA’s leaders have fought them tooth and nail, and their allies in Congress have repeatedly voted against them.”

The NRA, in kind, blamed Democrats for blocking reasonable alternatives to the terror watchlist ban, which “respected due process.”