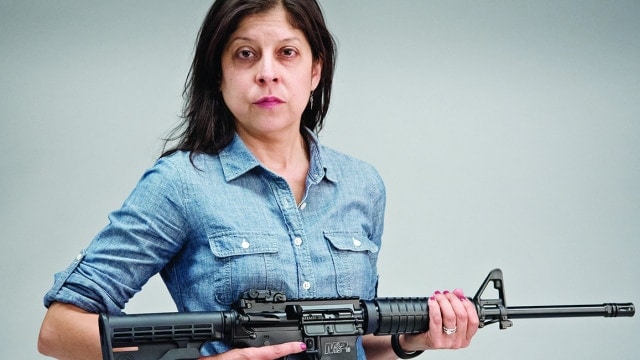 “Seven Minutes. That’s how long it took me to buy an AR-15, the type of semiautomatic rifle used in the deadliest mass shooting in modern American history,” starts the article. (Photo: Aaron Ricketts/Philly.com)

An award-winning columnist at the Philadelphia Inquirer Daily News was shocked– shocked— that it only took 7 minutes to legally buy an AR-15 over the counter.

Helen Ubiñas this week ventured down to her local licensed firearms dealer, plopped down her drivers license, filled out her 4473, waited for her background check, and was able to lawfully purchase a Smith and Wesson MP15– S&W’s AR variant for the bargain price of $759.99. Actively exercising her Second Amendment rights as outlined in the Constitution just as she experiences her First as a journalist.

It took seven minutes, which is part of the small bonus of the mandated National Instant Criminal Background Check System (NICS) is that it more often than not is actually near-instant.

Ubiñas was not impressed at the short elapsed time, having made it a point to see how long it would take to acquire a gun in the same general rhealm as the one used by the terrorist in an attack on an Orlando gay club Sunday.

If it wasn’t so easy to get a gun in this country, another gunman who came before him wouldn’t have been able to use the same kind of firearm to kill elementary-school children in Newtown, Conn.

If it wasn’t so appallingly easy to get a gun in this country, it wouldn’t be easy for the next gunman to deliver the kind of carnage that’s as much a part of this country as the American flag.

The writer went on to touch on mental illness and homophobia in her article, going on to explain that she subsequently wheeled the entry level MP-15 down to the local Philly Police station and did a public service by turning it in as she figuratively wept for the nation.

My heart is with you all. But while we’re mourning the dead, let us mourn the national loss of humanity that is to blame for this world we have created.

And let us take more than seven minutes to do it.

What was missing from the piece was any mention of the fact that NICS contains over 14 million active records of those who are classified as prohibited firearms possessors under the law and that, if hers was one of those files, she would likely have met with a denial such as over 1.3 million have since the system went active and not left with a firearm.

Also missing is from the Newtown reference was that the killer in that tragedy obtained the gun he used after first killing the registered gun’s owner, a crime unlikely to have been stopped by a background check.

Maybe there wasn’t enough space in the column. Digital ink is expensive after all. Concision is not limited to broadcast media.

Then of course at least one firearm attorney thinks that more than a few laws were broken during the purchase by Ubiñas.

Nonetheless, the Philly sale is among the latest trend in investigative journalism this week, with members of the media helping to boost NICS numbers by running out and timing their sprint through a successful gun sale.

It took a CBS News producer 38 minutes to pick up an AR-15 in Virginia while an intrepid 20-year-old blogger with an expired ID writing for Tab felt sure he could get one in five minutes but didn’t actually go through with the sale.

In the end, Smith and Wesson probably hated getting their share of that $750 while the Philadelphia Police Department, which picked up 1,356 Vietnam-era M16A1 rifles in August of 2009 from the military, was probably thrilled to get a new patrol rifle literally walk right in the door, courtesy of the Daily News.