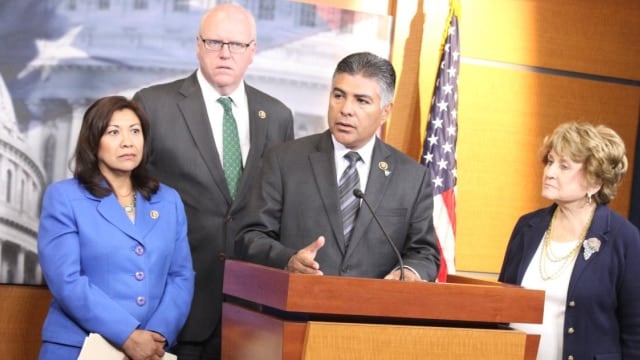 A Democrat-backed proposal that would trigger a committee hearing on gun violence each time a moment of silence is held in the House is adding co-sponsors this week.

U.S. Rep. Tony Cárdenas, D-CA, introduced the resolution mandating action in the emotionally charged days after an act of crime in the weeks after the San Bernardino shooting.  This week it gained a number of co-sponsors, currently sitting at 124, all Democrats. Of these, more than a third are from the states of California and New York alone.

Cárdenas argues the rule change is needed to move legislation to a vote.

“Members of Congress have introduced dozens of bills to try to address the problem of gun violence, yet no meaningful action has taken place,” said Cárdenas in a previous statement about his proposal. “This is not about taking away a citizen’s second amendment right to bear arms. By changing the rules, we are setting a new standard for Congress to act rather than merely stand in silence.”

The move, H.Res.694, would amend House rules to direct the Speaker to, whenever a moment of silence is held concerning gun violence, subsequently schedule a standing committee or subcommittee meeting to hold hearings into the matter within the next legislative day.

On Monday, House Democrats railed against Republican leadership following a moment of silence in observance of the terror attack in Orlando that killed 49 the weekend prior, yelling at House Speaker Paul Ryan, “Where’s the bill?”

Cárdenas weighed in on the Orlando shooting this week with a call for Congress to find a solution to such future events, to include addressing modern sporting rifles.

“Why would the average person need an assault-type rifle?” he said in a statement. “What’s worse, why would we as a country continue to allow just anyone to have one? This is not the first time someone has been able to kill multiple people in a short time all because the person had the kind of gun that was built for military or war.”

The resolution is currently in the House Rules Committee.