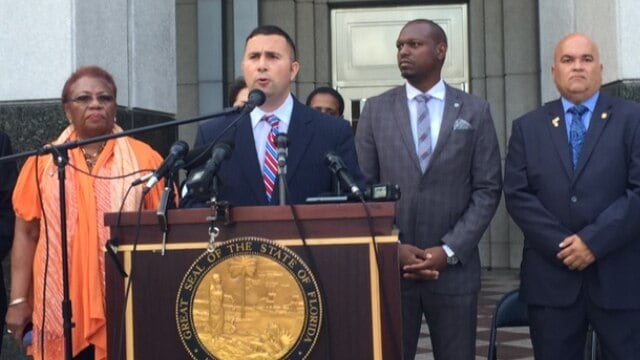 A group of state lawmakers this week came together to call for a special session of the Florida legislature to vote on a measure to ban gun purchases by those in the Sunshine State who are on federal watch lists.

Two state senators, Geraldine Thompson and Darren Soto, joined with state Reps. Randolph Bracy and John Cortes– all Democrats from the Orlando area– on Wednesday to call for the action in the wake of the deadly terror attack that left 49 dead.

“As we stand here today, there is nothing to stop another would-be terrorist released from the FBI’s watch list from walking into a gun shop and carrying out an attack on innocent victims,” said Soto in a statement. “But we don’t need to wait for the federal government to close a glaring loophole in the safety net. We have that power to close it ourselves.”

The group is urging the leaders of the Republican-controlled Florida Legislature, which had its final day of the 2016 session in March, to reconvene to vote on a proposal banning the sale of firearms in the state to those on government watch lists. Subsequent checks would be performed by the Florida Department of Law Enforcement (FDLE) in a move similar to the one proposed by Connecticut Gov. Dannell Malloy last December.

Republican lawmakers and gun rights groups argue the watch list is a bad tool for an arbitrary gun prohibition list as it contains as many as 700,000 names and has little redress for due process. U.S. Rep John Lewis of Georgia, the late Sen. Ted Kennedy, South African President Nelson Mandela and even singer Cat Stevens were at one time or another all members of the no-fly list.

Senate President Andy Gardiner, R-Orlando, has expressed little appetite to call the body back into session and has given a nod to the fact that the two senators behind the call are running for greater political office.

Thompson is in the midst of a run for U.S. Congress in the 10th District, challenging former Orlando Police Chief Val Demings among others, while Soto is running to succeed U.S. Rep. Alan Grayson in the 9th District who in turn is backing similar legislation in Washington this week while running against failed GOP Presidential candidate U.S. Sen. Marco Rubio.

“The President does not support expending taxpayer dollars on a special session unless there is definitive support within the Senate for a concrete legislative proposal that requires time-sensitive action,” Katie Betta, Gardiner’s spokeswoman, told the News Service of Florida. “Absent those elements, the President has a hard time viewing press conferences calling for a special session three days after the worst act of terrorism in this country since Sept. 11 as anything more than political posturing by two senators who have declared their intention to run for Congress.”

If the request for the special session is rejected by House and Senate leaders, the lawmakers are asking that the legislature be polled.