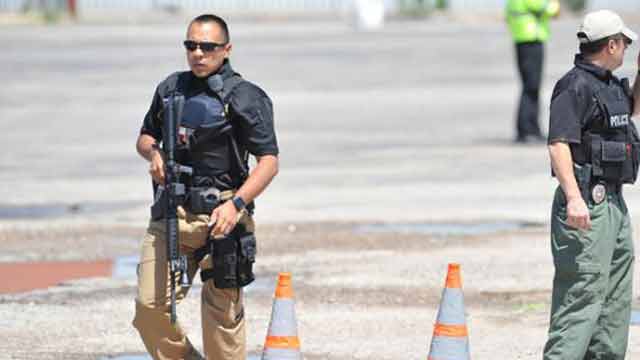 The situation came to an end just over an hour after the first call came in. (Photo: Amarillo Globe-News)

A 54-year-old man is dead following a standoff with law enforcement at an Amarillo Walmart Tuesday afternoon.

Officers first received a call about an active shooter situation just after 11 a.m. According to a statement from the city of Amarillo, the suspect, Mohammad Moghaddam, entered the store with a handgun and fired at least one shot into the ceiling near the cash registers. Initial reports indicated that Moghaddam then took the store manager hostage and led him into an office area in the back of the building.

An investigation later revealed that Moghaddam was a Walmart employee who became engaged in a dispute over a promotion with store management.

Seeing that Moghaddam was still armed with a handgun and deemed a threat to both the officers and the remaining hostage, SWAT officers fired multiple shots, striking Moghaddam, who was pronounced dead at the scene. Both hostages were taken to safety and uninjured.

Friends and family identified the first hostage as store manager Glenn Jones. The identity of the second hostage was not released.

Alicia Langham, Jones’ sister, said she and his wife were in tears while talking on the phone.

“Glen is an amazing man and father. God protected him today,” Langham told the Amarillo Globe-News.

The incident is being investigated by the Amarillo Police Department Special Crimes Unit, which typically investigates officer-involved shootings. The officers involved have been placed on administrative leave, as is standard protocol.

“I want to commend the Amarillo Police Department, other law enforcement officers, and first responders for their handling of today’s incident,” Rep. Thornberry said in a statement.

“Every day law enforcement officers stand ready to protect the public, even at the risk of their own lives,” he added. “Especially in recent months, I do not believe they get the thanks they deserve. Today we have all been reminded.”