A little CLP should clean that right up (6 PHOTO) 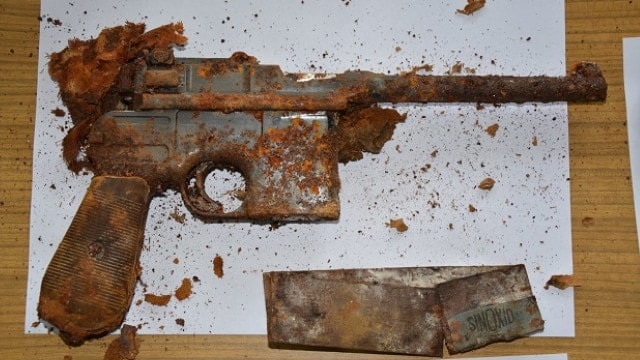 The Mauser had seen better days but looks good for what was likely decades hidden underground (Photos: Ghosts of the Eastern Front)

A man in Wałbrzych, Poland– you know Wałbrzych, right?– went to digging in his garden and found a strongbox that a prior owner left behind.

Inside the box was a leather military style holster, what looks to be a commercially made C96 Mauser “broomhandle” pistol with a good bit of surface rust from where moisture had seeped in over the years, a moldy box of RWS of Nuremberg (Rheinisch-Westfälischen Sprengstoff-Fabriken) brand 7.63x25mm (.30 Mauser Automatic) rounds on 10-shot stripper clips, and a box labeled “Sinoxid” which is a brand of primers developed back in the 1920s now owned by RUAG.

The gun looks like it has a small-ring hammer and you can see the “WAFFENFABRIK MAUSER OBERNDORF A. NECKAR” marking peeking out through the rust. Also note the large tangent rear sights– which were optimistically graduated to 1,000 meters

If you are curious about all of the German swag, Wałbrzych used to be called Waldenburg and was part of Germany until 1945 when the Soviets came in and, in accordance with the Potsdam Conference, the city became part of Poland. The German population was expelled and new Polish citizens were brought in to occupy the deserted border town.

And on his way out some Herr likely buried his old Mauser in the garden thinking for sure he would be able to come back for it one day.

People did that a lot.

According to the post, the new owner passed the gun on to police.

[ Ghosts of the Eastern Front ]