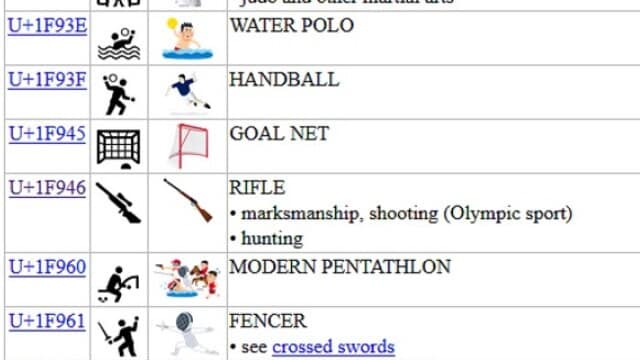 Although both the first modern Olympiad in 1896 had both the “military rifle” and the “free rifle” events and long guns have been used at every meeting of the games since, Apple would not support emojis for them on their devices this year. (Photo: screenshot)

Ideograms featuring a rifle and a pentathlete shooting a pistol, set to be added for the upcoming Olympics, will not make it to smart phones and mobile devices around the world due to Apple’s objections.

The campaign over digital arms control dates back to last summer when New Yorkers Against Gun Violence kicked off their “Disarm the iPhone” drive targeting Apple CEO Tim Cook and asking the gun emoji be removed. The group cautioned that the gun emoji, one of hundreds on the product that come pre-loaded from the factory, reflects the ready access to firearms in the country.

While the weapons currently used by the Unicode Consortium, an international non-profit that works to ensure interoperability of the various smiley faces and emoticons across multiple devices, aren’t going anywhere for now, some new ones set to be added for this summer’s Olympic games in Brazil sparked outrage last fall.

This led Unicode Consortium founder Mark Davis, who is also the chief internationalization architect at Google, to say last October that, “Some people are bothered by the inclusion of the rifle as a candidate…But the reason that’s included is because shooting is an Olympic sport.”

However as reported by Buzz Feed News, Apple told the consortium it would not support a rifle on its platforms and asked for it not to be made into an emoji. The modern pentathlon emoji, which depicts a man firing a pistol among a field of other participant in that event’s courses, was likewise scuttled.

The good news is, recently approved Unicode emojis will include a lying face with a long nose, bacon, a person taking a selfie, and a gorilla.

We guess no one heard of Harambe.