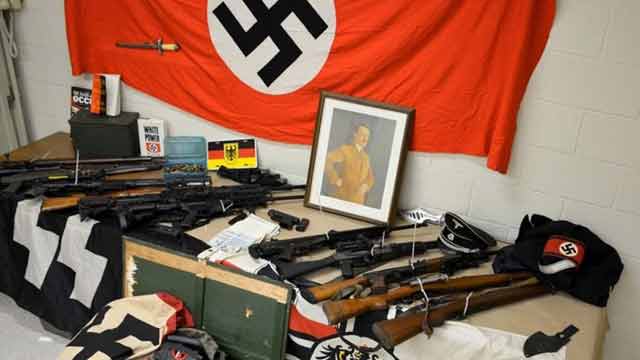 Suffolk County police Commissioner Timothy Sini said that the gravity of the situation, which he called “a big score,” could not be overstated. (Photo: Suffolk County Police Department)

Two brothers from Mount Sinai, New York, were arrested Thursday after an early morning search warrant uncovered guns, ammunition, drugs, bomb-making materials and a slew of Nazi propaganda. And while some neighbors say the men have been nothing but trouble, at least one acquaintance said the brothers are “legitimately good people.”

The warrant was executed around 6 a.m. According to a press release from the Suffolk County Police Department, “During the search, a .40-caliber Glock, six assault rifles, four rifles, 25 high-capacity magazines, one shotgun, one stun gun, $42,940 in cash, approximately 4 ounces marijuana, approximately 26 grams of hallucinogen (mushrooms), 14 knives and between 3,000 and 5,000 rounds of ammunition were seized.”

Suffolk County police Commissioner Timothy Sini indicated that the execution of the search warrant and subsequent arrests may have prevented a violent incident such as what was experienced in Orlando last week.

“These individuals pose a clear and present danger, or at least they did,” Sini said. “They have clearly subscribed to a hateful ideology, they had an illegal arsenal at their fingertips.”

But a friend of the two brothers, who only wanted to be identified as “Bob,” said the authorities have it all wrong. He said he has known the two his entire life and they were not planning any acts of violence. As far as the confiscated items go, Bob said the older brother, Edward, runs a military surplus store and that’s why he had those things. Bob, as well as another brother of the suspects, deny they are Nazis.

But neighbor Brian Saltzer said the two brothers have created an ongoing problem. He claims they’re involved in dealing drugs and he has called the police on them multiple times. Saltzer even said he has been assaulted by the suspects in the past.

Another neighbor, Larry Bilello, also indicated the police have been called to the home between some 20 times. Bilello, who said they never had problems in the area before the brothers moved in, expressed relief over their arrests and noted that the noise, partying and traffic to and from the house was out of control.

The brothers’ attorney said they plan to fight the charges.