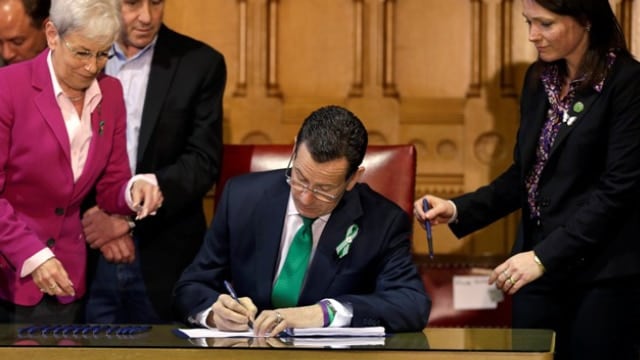 The nation’s highest court on Monday declined to take up a challenge to Connecticut’s 2013 assault weapon ban expansion rushed through in the wake of the Sandy Hook shooting.

The state has had a prohibition very similar to the expired Federal Assault Weapons Ban since 1994. However, more than 100 new models were added to this ban in April 2013, following the mass shooting in Newtown, leading to some 50,000 weapons and a similar number of large capacity magazines registered.

Gun rights advocates challenged the measure in federal court and were defeated in January 2014 when the judge in that case found the law was Constitutional, striking a fair balance between the government’s interest in public safety and the right of the people to keep and bear arms.

“The court concludes that the legislation is constitutional,” wrote senior U.S. District Judge Alfred V. Covello in his decision. “While the act burdens the plaintiffs’ Second Amendment rights, it is substantially related to the important governmental interest of public safety and crime control.”

A subsequent appeal heard by a three-judge panel of the U.S. Second Circuit Court of Appeals — which was coupled with a challenge from the New York State Rifle and Pistol Association taking the Empire State’s SAFE Act to task — was upheld in a unanimous decision last October setting the stage for a petition to the Supreme Court.

In the months between then and now, the high court turned down a very similar case brought by gun rights advocates against the Chicago suburb of Highland Park in December with Justices Thomas and Scalia dissenting on the grounds it turned the Second Amendment into a “second-class right” and that responsible, law-abiding citizens should be able to protect themselves and their homes with the most popular rifle platform in the country.

Further, Scalia’s unexpected death this February without replacement on the bench led NYSRPA to drop out of the case, arguing the risk of moving forward outweighed any possible reward.

“Given what we know or believe about the current makeup of the Supreme Court, the best case scenario would be a 4-4 decision, which would result in the Second Circuit’s decision being affirmed,” said Jay Porter, a lawyer working on the New York appeal at the time.

This left the Connecticut case, challenging Gov. Dannell P. Malloy in his official capacity, to go it alone.

The justices declined to accept the petition in the case in their Monday orders without comment — in effect letting the lower court decision stand.

However, leaders for the Connecticut Citizens Defense League, plaintiffs in the litigation, aren’t backing down.

“We fully intend to renew our challenge to Connecticut’s blatantly unconstitutional ban as soon as there are five Justices sitting on the Supreme Court committed to the proper understanding of the Second Amendment,” CCDL President Scott Wilson said in a statement.

Malloy’s office argued Monday that the state made the right choice to toughen their laws in 2013 and the Supreme Court’s rejection of the case this week emphasized that.

“We are safer today because of our gun laws, and I thank the Supreme Court for recognizing that states can be smarter about how we sell guns and what kinds of guns we sell, and that those commonsense steps do not infringe on Constitutional rights,” said Malloy in a release. “Now, it is incumbent upon Congress to do what’s right and follow Connecticut’s lead in embracing basic steps regarding guns – like universal background checks – that the vast majority of Americans support.”