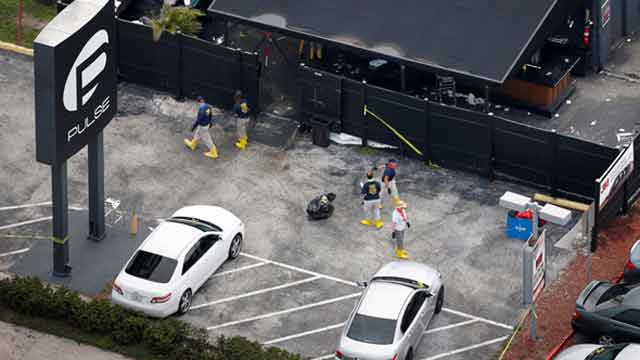 More than three hours passed from the time the first 911 call came in until the time the suspect was shot dead by the police. (Photo: Adrees Latif / Reuters)

As the investigation into the deadly shooting at an Orlando nightclub last weekend continues, the Federal Bureau of Investigation and Department of Justice released additional information to the public Monday, outlining a timeline of events surrounding the incident, as well as a partial transcript of the 911 call placed by the shooter.

Both the FBI and Justice Department confirmed that, out of respect to the victims, their families and law enforcement, audio of the 911 calls placed by either the shooter or any of the victims will not be made public at this time.

A joint statement from the FBI and DOJ was also released Monday in reference to the updated information.

The purpose of releasing the partial transcript of the shooter’s interaction with 911 operators was to provide transparency, while remaining sensitive to the interests of the surviving victims, their families, and the integrity of the ongoing investigation. We also did not want to provide the killer or terrorist organizations with a publicity platform for hateful propaganda. Unfortunately, the unreleased portions of the transcript that named the terrorist organizations and leaders have caused an unnecessary distraction from the hard work that the FBI and our law enforcement partners have been doing to investigate this heinous crime. As much of this information had been previously reported, we have re-issued the complete transcript to include these references in order to provide the highest level of transparency possible under the circumstances.

According to an FBI press release, the Orlando Police Department was first alerted of shots fired inside the Pulse nightclub just after 2 a.m. on Sunday.

Within minutes, officers from the OPD, as well as other law enforcement agencies, arrived on the scene, entered the nightclub and engaged in a brief shootout with the suspect. Ten minutes later, the Orlando Police Department’s SWAT unit was called in to assist, while a number of hostages remained trapped inside the facility.

Then, at 2:35 a.m., while still inside the nightclub, the shooter placed a 911 call, which lasted less than a minute. That call, a portion of which was translated from Arabic, is transcribed below. The 911 dispatcher is referred to as “OD,” while the shooter, Omar Mateen, is noted with an “OM.”

OD: Emergency 911, this is being recorded.
OM: In the name of God the Merciful, the beneficent [Arabic]
OD: What?
OM: Praise be to God, and prayers as well as peace be upon the prophet of God [Arabic]. I wanna let you know, I’m in Orlando and I did the shootings.
OD: What’s your name?
OM: My name is I pledge of allegiance to Abu Bakr al-Baghdadi of the Islamic State.
OD: Ok, What’s your name?
OM: I pledge allegiance to Abu Bakr al-Baghdadi may God protect him [Arabic], on behalf of the Islamic State.
OD: Alright, where are you at?
OM: In Orlando.
OD: Where in Orlando?

At that point, the call ended.

A short time later, the shooter became engaged in three separate conversations with the Crisis Negotiation Team. The first call lasted approximately nine minutes, the second 16 minutes and the third and final call, which came in at 3:24 a.m., was the shortest, lasting only around three minutes.

During the course of these calls, the suspect told authorities he was an Islamic soldier who pledged his allegiance to [omitted by the FBI]. The suspect also indicated his motivation stemmed from the United States bombing Syria and Iraq, which he said needed to stop. Further, the suspect stated there was a vehicle nearby with bombs in it.

“You people are gonna get it, and I’m gonna ignite it if they try to do anything stupid,” he told a negotiator.

Authorities later learned which vehicle was owned by the suspect, and it was found not to contain any type of explosive devices.

Before ending the final conversation with the negotiator, the suspect said, “In the next few days, you’re going to see more of this type of action going on.”

Following that statement, the suspect hung up the phone and he was unable to be reached again.

After the conversations with the suspect ended, officers removed an air conditioning unit from the window of the club’s dressing room, allowing several victims to escape. These victims then provided authorities with invaluable information about what was happening inside the club, including the fact that the suspect said he was going to start strapping bombs to the victims within 15 minutes.

Half an hour later, just after 5 a.m., the Orange County Sheriff’s Office Hazardous Device Team used explosive charges and an armored vehicle to penetrate the club’s wall and free the remaining surviving hostages.

At 5:15 a.m., officers with the Orlando Police Department confirmed shots had been fired and the suspect was down.

The suspect was pronounced dead at the scene. In the end, 49 people were killed and another 53 were wounded.