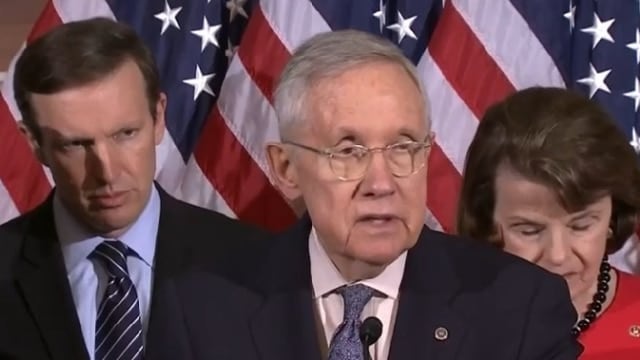 It was all hands on deck Monday evening when a full 100-member Senate took roll calls on a set of gun control amendments only to see each one rejected in turn.

The measures, two backed by Democrats and two by Republicans, aimed to expand background checks, strengthen the background check system and make it harder for those associated with terror watch lists to legally purchase firearms. In an end-run around legislative committees, they were introduced as amendments to a Justice Department spending bill directly to the floor as part of a concession earned following a nearly 15-hour filibuster by chamber Democrats last week.

The legislation needed a solid 60-vote bipartisan approval to pass and, with 54 GOP members and 46 Democrats and Independents, there were not enough party defections on either side of the aisle to make that happen.

The leading measure from the left, one by California’s Sen. Dianne Feinstein to give the Attorney General the authority to block the sale of guns or explosives to known or suspected terrorists if there is a reasonable belief the weapons could be used in connection with terrorism, failed 47-53. This was a better showing than the 45-54 party line vote the same proposal garnered after the San Bernardino terror attack last December.

The second Democrat-backed amendment, Sen. Chris Murphy’s universal background check bill, was the stinker of the night, failing 44-56, receiving even less votes than it garnered either in December or three years ago as Manchin-Toomey despite picking up Republican Sen. Mark Kirk of Illinois. Notably, two Dems – Sens. Heidi Heitkamp and Jon Tester – jumped ship and voted against their fellow party members.

Of the Republican proposals, they proved slightly more popular but still couldn’t gain enough steam to hit the magic 60 number with Texas Sen. John Cornyn’s plan to delay background checks for those on terror watch lists and one by Sen. Chuck Grassley to further strengthen the background check system both falling short at 53-47.

Just over two hours of voting and discussion ended without accomplishing any forward motion on the four amendments, with Majority Leader Mitch McConnell, R-Ky., kicking them down to the Appropriations Committee.

A fifth option, a compromise measure set to be introduced by Maine Republican Susan Collins and co-sponsored by Jeff Flake of Arizona on Tuesday, is in the works.

Sen. Rob Portman, R-Ohio, did take the floor at the end of the vote to enter his remarks about the Cleveland Cavaliers winning the NBA Championship this week saying, “This is a big deal in Cleveland,” calling the city “Believe-land” and quoting LeBron James.

Murphy, who led the eighth-longest filibuster in modern congressional history to get a chance to hold the vote, was disappointed at the outcome.

“I’m mortified by today’s vote, but I’m not surprised by it,” he said in a news conference Monday evening. “We learned in the months after Sandy Hook that the NRA has a vice-like grip on this place. Even when 90 percent of the American public wants change.”

Gun control groups to include Everytown, New Yorkers Against Gun Violence, Moms Demand Action, the Brady Campaign and others were quick to slam the impasse and promised voters would register their displeasure at the polls.

“Eventually, the senators who voted against the Feinstein and Murphy amendments — or for the weak substitute amendments offered by Republicans — are going to have to answer to their constituents for their inaction,” Coalition to Stop Gun Violence Executive Director Josh Horwitz told Guns.com.

The National Rifle Association, who supported the GOP measures, called the display Monday embarrassing, but promised to be part of legislative reform to keep guns out of the hands of those who are dangerous.

“We thank the majority of the senators for rejecting the gun control proposals of Senators Feinstein and Murphy,” said NRA Institute for Legislative Action Executive Director Chris W. Cox, in a statement emailed to Guns.com. “We applaud Senators Cornyn and Grassley for securing majorities for their common-sense proposals. We look forward to working with those interested in real solutions to keep the American people safe, including their right to defend themselves in the face of government failure.”

U.S. Rep. Elizabeth Esty, D-Conn., who is Vice Chair of the House Gun Violence Prevention Task Force, blasted the Senate’s vote and urged the lower chamber of Congress to take the reins for increased gun control.

“I’m calling on the House to show the leadership the Senate failed to show,” said Esty in an email to Guns.com. “Speaker Ryan should schedule an immediate vote on legislation to keep guns out of the hands of terrorists and to extend background checks to all commercial gun sales.”

House Minority Leader Nancy Pelosi is promising to keep lawmakers in session as long as it takes to approve gun control legislation.

“The Republican Congress must not leave Washington without passing common sense gun violence prevention legislation to keep the American people safe: No Bill, No Break,” she said in a statement late Monday.