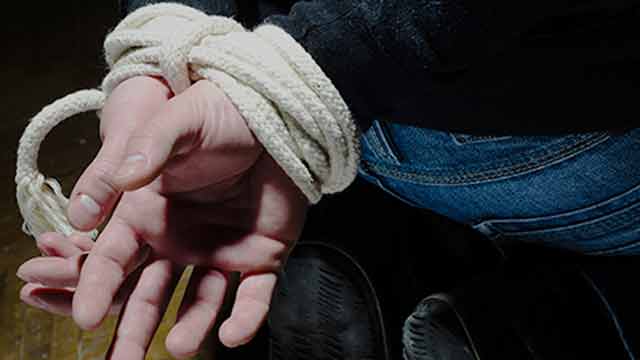 While he was being held by his abductors, Cory Still was threatened at gunpoint, blindfolded and bound with zip ties, rusty chains and padlocks. (Photo: FBI)

The Federal Bureau of Investigation recently pointed to a 2014 kidnapping as evidence that the violent reach of the Mexican drug cartel can be found almost anywhere, even in small towns across America.

While on his way to work, 23-year-old Cory Still was abducted on July 9, 2014, from St. Matthews, South Carolina, a small rural town with just over 2,000 people, located about 85 miles outside of Charleston. Several hours after Still failed to make it to work, his fiancee found his truck on the side of the road, abandoned, with the keys still in it.

Still’s family subsequently filed a missing persons report, but the night he was kidnapped, his fiancee received a call indicating Still was still alive and she would be receiving instructions within the next 24 hours. The caller also informed Still’s fiancee that Still’s father needed to be present when the next call came in. As it turned out, Still’s father, who was later found out to have been distributing marijuana, owed $200,000 to the drug cartel for a drug shipment that went missing.

The following day, the FBI became involved in the investigation, which included a massive, multi-agency search for Still that lasted six days.

“We worked around the clock interviewing Still’s family and associates to develop and run to ground every possible lead,” said Special Agent Luke Davis, who works out of the FBI’s Columbia Field Office.

Davis said it was a “crucial error” made by one of the kidnappers that eventually led authorities to Still.

An investigation revealed that the first ransom call came from a Mexico-based phone number, and further probing determine that minutes prior to that call, another call from the same cell phone went out to a North Carolina number. Altogether, the kidnappers made more than a dozen ransom calls, and during that time, authorities were working hard to pinpoint where the calls were coming from.

But eventually, authorities were able to track down one of the cell phones, which led to one of the kidnappers, Juan Fuentes-Morales, in Garland, North Carolina. At that location, officers found another cell phone used in the ransom calls, as well as a pistol used during the abduction. But nonetheless, Still was nowhere to be found.

A short time later, a second warrant was executed at a location near Roseboro, North Carolina. There they found Still, blindfolded, bound and lying on the floor, as well as the other two people involved in his abduction, who were identified as Ruben Ceja-Rangel and Luis Castro-Villeda.

“There is no doubt in my mind that if we didn’t find him, he would not be alive today,” Davis said.

All three suspects were arrested, and last year Castro-Villeda was given 30 years after pleading guilty to kidnapping and other charges. Just last month, Ceja-Rangel was sentenced to serve 56 years in federal prison, while Fuentes-Morales has yet to be sentenced.

Davis said he was proud of the collaborative efforts by law enforcement, which helped to take three violent offenders off of the streets. But when asked if he was surprised by the Mexican drug cartel bringing violence into the small town, Davis replied, “Not at all. The traffickers are everywhere.”