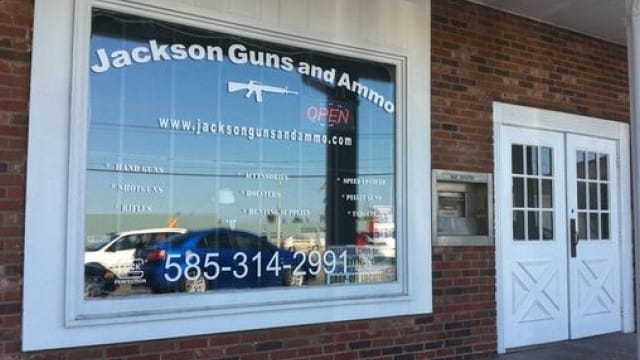 Jackson Guns and Ammo closed in 2015 amid controversy and now state police have arrested the owner and two former employees. (Photo: Rochester Democrat and Chronicle)

Officials contend the trio, all either owners or employees of Jackson Guns and Ammo, violated the New York Secure Ammunition and Firearms Enforcement (SAFE) Act enacted in 2013 by selling more than 100 illegal guns from the shop’s Henrietta, New York, location.

Charged with multiple felonies by the New York State Attorney General’s office — including Criminal Sale of a Firearm in the first degree, which carries up to 25 years in prison — are shop owner Kordell Jackson, 40, and former employees Ken Youngren, 30, and Joshua Perkins, 28.

According to a release from Atty. Gen. Eric T. Schneiderman, the shop was the subject of a two-year investigation by the state police starting in 2014 when the Bureau of Alcohol, Tobacco, Firearms and Explosives alerted authorities to possible SAFE Act violations after an inspection of the store’s records.

Following up on the tip, the New York State Police Community Narcotics Enforcement Team contacted those who had purchased possibly illegal guns bought from Jackson Guns and Ammo after the state’s expanded assault weapons ban took effect. In the end they found over 100 had been sold which were subsequently recovered from the buyers.

These actions were the subject of much discussion in blogs and user forums in the Empire State gun community.

Though the shop closed in January, a search warrant conducted by state police and the U.S. Marshall’s Service on Perkins’ home on June 15 — after authorities observed illegal magazines in the open there on an unrelated matter — netted four guns classified under state law as assault rifles and dozens of illegal large capacity magazines in addition to untaxed cigarettes, narcotics and $25,000.

Scheiderman contends the enforcement action shows that the SAFE Act works, though it has been the subject of legal challenges only recently dropped.

“New York has enacted some of the toughest, most sensible gun safety laws in the country, and with today’s charges, we are sending a message that these laws will be vigorously enforced,” said Schneiderman in a statement. “The tragedies in Orlando, Newtown, Aurora, and too many other communities across the country are clear signs that we need to get our national gun violence epidemic under control. Weapons of war have no place on the streets of America and, in New York, we’re doing something about it.”

Paul Ciminelli, Jackson’s attorney, told the Rochester Democrat and Chronicle his client is the first gun shop owner charged under the SAFE Act, which he contends is too vaguely worded to be enforceable.

“Our client was a licensed dealer who operated his business in accordance with all state and federal laws,” said Ciminelli. “This action by the state attorney general is not about gun control. This case is about fundamental fairness and knowing what the law permits and prohibits.”

Internet archives of the store’s website from Nov. 2014 show Jackson Guns billed itself as being well versed in the state’s gun laws:

Specializing in AR’s, AK’s as well as modern Pistols and Shotguns. Our Friendly and Knowledgeable Staff is ready and willing to help at anytime.

We now have a Black Rifle Specialist on staff, and are now offering 922r federal compliance (Saiga conversions) and all NY compliance modifications. We can also assist you in planning or completing your custom AR build. Lower or uppers if you can dream it we can build it!

According to the NYSP, Jackson and Perkins are in police custody, and Youngren was expected to surrender Tuesday.