Jaguar shot during Olympic ceremony after it escapes handlers 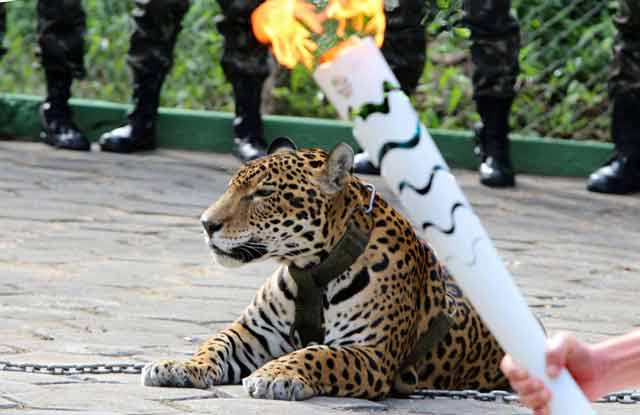 A jaguar by the name of Juma was supposed to be a part of the Olympic torch ceremonies in Brazil Monday, but when the wild animal escaped from its handlers, it was shot and killed.

The jaguar was from the Amazon and living at a zoo which was located next to a military training facility. The animal was chained up during the exhibition, and when it broke away from its handlers was initially shot with a tranquilizer. The tranquilizer failed to have an effect on the animal though, and as it moved toward a soldier, the soldier fired a single shot, striking the animal and killing it.

Ipaam, the governmental authority of the Amazonas that monitors the use of wild animals, is investigating the incident, as it appeared there were no permits issued for using the jaguar in the ceremony.

The Rio 2016 organizing committee scoffed at the idea of having the animal in the ceremonies in the first place.

“We made a mistake in permitting the Olympic torch, a symbol of peace and unity, to be exhibited alongside a chained wild animal,” the committee said in a statement. “This image goes against our beliefs and our values. We guarantee that there will be no more such incidents at Rio 2016.”

“The day and age in which the display of such a magnificent creature ‘brought to heel’ as a symbol of power or influence is in the past, and I would hope that this incident will serve as a poignant indicator to the world at large that these practices are no longer acceptable,” said Luke Dollar, head of the National Geographic’s Big Cats Initiative.

“The symbol of the jaguar, in the absence of one on a chain, is just as powerful, and—I would argue—much more compassionate,” said Dollar.