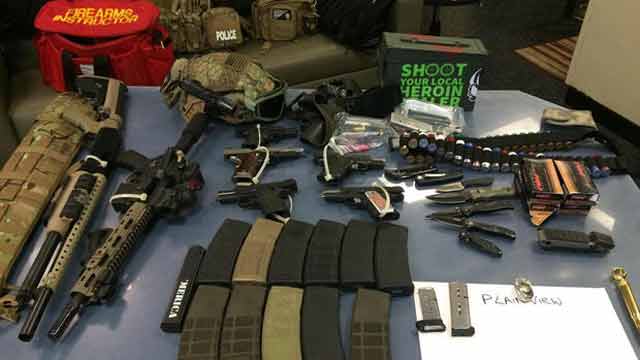 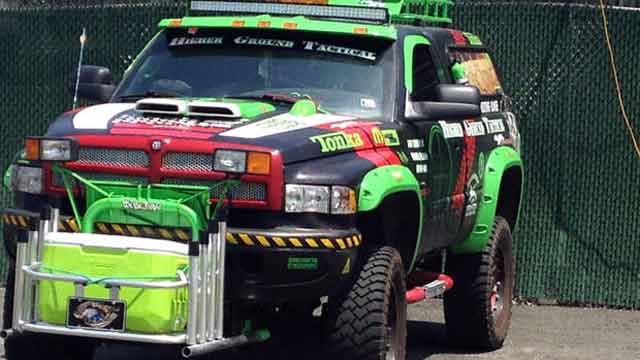 Three men who said they going to save a kidnapping victim at a hotel in Brooklyn were arrested Tuesday morning after officers discovered a cache of weapons in their vehicle.

The truck, a flashy vehicle from Higher Ground Tactical in Emmaus, Pennsylvania, was stopped on the New Jersey side of the Holland Tunnel for a cracked windshield. Officers noticed a full magazine in plain view, and when the driver was asked to step out of the vehicle, a handgun was revealed. A search of the truck turned up multiple long guns and handguns, knives and bulletproof vests. Drugs were also reportedly found in the vehicle.

John Cramsey, 50, and Dean Smith, 53, both of Zionsville, Pennsylvania, and Kimberly Arendt, 29, of Lehighton, were arrested on multiple charges.

According to a Facebook post from Cramsey, the day of the arrest marked the four-month anniversary of the death of his 20-year-old daughter, who died from a heroin overdose. In the post, Cramsey said, “I have been fighting the Demon that stole you from me with everything I got. A Go Fund Me account, titled “Help John Cramsey fight heroin,” was started, but has since been taken down.