Is Johnson a realistic Second Amendment alternative to Clinton and Trump? 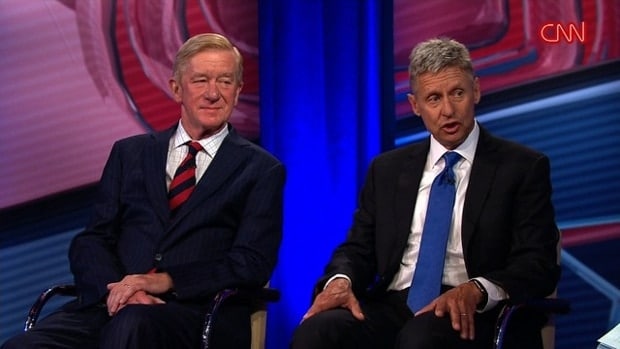 Libertarian presidential candidate and former governor of New Mexico Gary Johnson during a CNN town hall Wednesday night defended current gun control laws, saying he would not seek to roll them back should he be elected into office.

Johnson was joined by running mate Bill Weld, former governor of Massachusetts, and said he could support an assault weapons ban, but would not support outlawing semi-automatic rifles.

The presidential candidate said he disagrees with the efforts of both Democratic and Republican legislators who seek to keep guns from Americans on the federal government’s secret terrorist database, which reportedly includes a terror watchlist, a no-fly list and other similar lists.

“All of these government lists are subject to error,” Johnson said.

However, both candidates said they are open to legislation which would keep guns out of the hands of potential terrorists and also the mentally ill. They also proposed the formation of an FBI task force which would treat Islamic State terrorists like an organized crime syndicate and not like a group of military combatants.

Despite his proposed support of an assault weapons ban, Johnson has a consistent pro-gun stance, having gone on record strongly supporting absolute gun rights, according to Ballotopia.

After a mass shooting in Orlando on June 12 – when a gunman killed 49 people and injured 53 others at a gay nightclub – Johnson said Americans would be safer with looser gun regulation, USA Today reported.

“All these atrocities have been happening in gun-free zones,” Johnson said. “If there were law-abiding citizens that were carrying weapons – I’m not saying they would lessen the impact of these horrible atrocities, but maybe, maybe they could.”

In his 2012 book “Seven Principles of Good Government,” Johnson said he supports gun ownership rights and in 2011 he told Playboy Magazine that gun control laws don’t work. If the government outlaws guns, he wrote, then only the outlaws will have guns.

“I don’t believe the laws regarding guns are effective. We’re allowed to bear arms. It’s part of a free society,” Johnson wrote.

Among the pro-gun legislation signed by Johnson was HB 112, which aimed to protect New Mexico shooting ranges from noise-based nuisance lawsuits seeking to shut them down.

Some Libertarians feel the National Rifle Association should have endorsed Johnson instead of Donald Trump, who the group threw its weight behind during its annual convention in Louisville, Kentucky, last month.

“A Libertarian Future” started as a Facebook page after the 2012 election when Johnson received more than 1 million votes, according to the group’s website.

“The fact remains that the NRA has other options,” J. Wilson wrote. “They never should have endorsed someone with Donald Trump’s record on guns. It shows to the Democrats that the NRA is okay with the gun control that Trump has supported in the past. That goes against every one of their members’ beliefs.”

In promoting last night’s Libertarian town hall, CNN billed the ticket as a possible alternative to both Trump and Hillary Clinton, offering voters a way out of a “lesser of two evils” proposition that has historically caused some – particularly young – Americans to shy away from the political process. Still, critics claim a vote for Johnson will give Clinton the presidency and that Trump is the stronger candidate to defeat the former Secretary of State.

The NRA’s legislative gradebook only started in 2002, a year before Johnson left the governor’s seat, where he served since 1995. Weld, also a two-term governor, served his state from 1991 to 1997 and wasn’t graded by the NRA.

The NRA declined to comment about the Libertarian ticket and has remained silent on its stance, likely standing behind the choice it made to keep an appearance of consistency. With talk of rule change at the Republican National Convention in Cleveland, Ohio – where Guns.com will be in attendance – effectively pulling the GOP nomination from Trump, Johnson seems like a more viable option. He will still need to get 15 percent in public polls to be able to participate in the presidential debates, which could inject new life into the Libertarian’s campaign.

Richard Feldman, former NRA lobbyist and president of the Independent Firearm Owners Association, donated to Johnson and Weld’s campaign. He knows “both Gary and Bill Weld,” Feldman said in an email to Guns.com. Johnson stayed at his house five years ago in New Hampshire and he worked for Weld in the mid-1970s when he ran for Massachusettes attorney general, Feldman said.