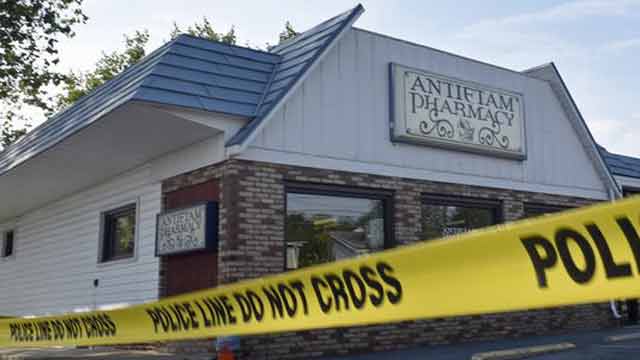 Authorities said this wasn’t the first time the pharmacy was targeted for a robbery. (Photo: Markell DeLoatch / Public Opinion)

A man who attempted to rob a pharmacy in Waynesboro, Pennsylvania, is recovering from multiple gunshot wounds after an armed employee opened fire on him.

The suspect, whose name has not been released, walked into the Antietam Pharmacy around 5:15 p.m. on Monday wearing the quintessential robber outfit: a ski mask, gloves, hoodie and handgun.

Witnesses said the suspect acted with extreme aggression and violently threatened the employees with his gun as he demanded money and prescription drugs. However, when the money from the cash register did not yield his expectations, he became further enraged, the Waynesboro Police Department said in a statement.

One of the pharmacy employees was carrying a legally owned revolver and when that employee began to fear for the safety of those involved, the employee retrieved the revolver and fired four rounds at the suspect, striking him multiple times. No one else was physically injured.

When police arrived on the scene, the suspect was taken to a local hospital, but later transferred via medflight to another facility for further treatment. As of Tuesday, he was listed in critical but stable condition.

Authorities said the suspect drove himself to the pharmacy and there were no other subjects involved in the crime.

No charges have been filed against the armed employee, but charges against the suspect are pending.

Waynesboro Police Chief Jim Sourbier told the Public Opinion that the Antietam Pharmacy had been targeted for robberies in the past.

“They know the drill. They know how to behave. I know these folks,” Chief Sourbier said of the pharmacy employees.

Likewise, local business owners told the newspaper that they were glad to hear of the way the pharmacy employees handled themselves.

“I’m darn proud of them,” said Eric Christie, owner of Christie’s House of Pipes and Cigars.

Carl Hill, owner of Hill Top Arms gun shop, said when he opened his doors on Tuesday, he had five people waiting to get in. Hill said the last thing they want to do is start a buying panic, but for those interested in owning firearms, they offer safety classes that also explore what guns can — and cannot — do for them.

“We thoroughly support people’s right to take responsibility for their own defense,” Hill said. “We have a marvelous police force. The fact of the matter is they can’t be every place. You are your own first responder.”