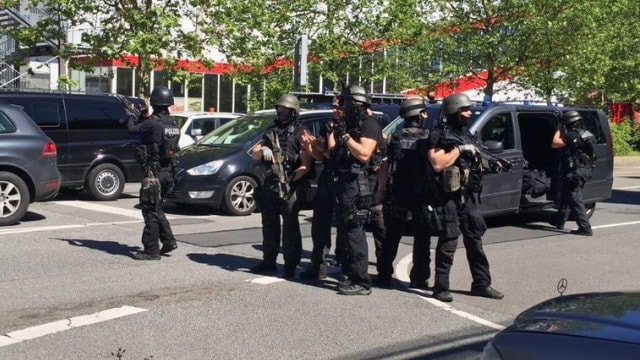 Heavily armed Spezialeinsatzkommando (SEK) units were on the scene quickly and the gunman is reportedly dead.

Initial reports have that an individual wearing a disguise fired in the air in a movie theater in Germany and the subsequent response left him dead and dozens injured.

As reported by the German language outlet Bild, a man entered the Kinopolis in the Rhein-Neckar-Zentrum shopping center located in the town of Viernheim around 2:45 p.m. Thursday draped with a cartridge belt and armed with an unidentified weapon from which he fired at least four shots in the air. This initiated a response from Hessian state police Spezialeinsatzkommando (SEK) counter-terror unit members from nearby Frankfurt.

Hessian Interior Minister Peter Beuth addressed an ongoing session of the Landtag, the parliament of Hesse in Wiesbaden, that the as-yet-unidentified gunman was shot and killed, stating that initial reports from the scene describe the individual as “confused” and is not believed at this time to be a terrorist.

Bild and other outlets reported at least 25 were injured by tear gas used in the assault on the theater and Frankfurter Allgemeine noted that some moviegoers may have at one point been taken hostage.

It should be noted that early information from such events, especially casualty estimates, is often wrong. The Darmstaedter Echo at one point noted that as many as 50 were injured.

Firearms in Germany are very tightly regulated, requiring licensing and registration, strict background checks and limits on where and when gun owners can shoot.

Further, the EU is seeking to step up gun laws on everything from black powder muzzleloaders to alarm guns and replicas. In Scotland, authorities are currently urging air weapon owners to register their guns or turn them in pending upcoming restrictions on that class of gun.

This is a developing story.

#German media now reporting that the gunman in #Viernheim was not arrested but shot dead. pic.twitter.com/dEF45EGoOB