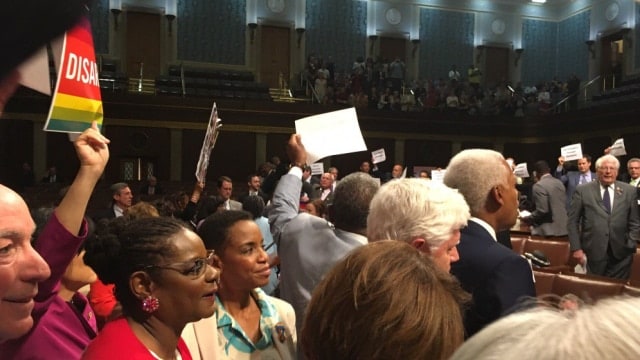 A sit-in staged by House Democrats has stretched well past 18 hours with no progress on gun control legislation in a move characterized by the right as diversionary.

Beginning around 11:15 a.m. Wednesday, some 40 lawmakers led by civil rights era Rep. John Lewis, D-Ga., began to occupy the floor of the chamber vowing not to move until the body had addressed gun violence. Lewis told the media that he planned the dramatic and unorthodox measure over the past few days.

Almost immediately gaveled into recess by Republican leadership, the live video feed via CSPAN was killed due to a longstanding policy to cease filming with the House not in proceedings. Sit-in attendees then switched to social media platforms such as Periscope and Twitter to get their message out with the hashtag #NoBillNoBreak beginning to trend just after noon.

“The sit-in by House Democrats is nothing more than a publicity stunt. The bill they’re talking about was already defeated in the United States Senate. It’s time for them to #StopTheStunt‬,” noted Republican House Speaker Paul Ryan on social media, carrying that message in interviews throughout the day.

When Ryan attempted to regain control of the body just after 10 p.m., increasingly vocal Democrats shouted him down.

Moving past midnight, the House came to order briefly to vote on two bills, attempting to override President Obama’s veto of a Republican-backed fiduciary rule change directed at retirement savings and a 239-171 party line vote to approve $1.1 billion in funds to fight Zika.

With Democrats still in open defiance, the House adjourned through the July 4 holiday, although approximately 20 lawmakers remained on the floor as of 7 a.m. Thursday including House Minority leader Nancy Pelosi, fortified by sleeping bags and snacks.

“And, again, this is the moment of truth where everyone comes together inspired, of course, most recently by Orlando – but never forgetting all of the damage that went before.  So we will be – this is our – for this moment, we are here on the steps of the Capitol, on the Floor of the House,” remarked Pelosi in a press conference Wednesday. “We will continue to be until we get a vote.”

It should be noted that in 2008, when Democrats controlled the House and Pelosi herself was Speaker, she ordered the chamber’s microphones silenced and lights extinguished during a GOP sit-in on gas prices.

Gun control advocates celebrated what they termed a historic moment.

“Leader Pelosi, Congressman Lewis, and dozens of their colleagues are showing extraordinary leadership today. And the American people are with them,” said Everytown President John Feinblatt in a statement emailed to Guns.com. “A clear majority of the public backs common-sense reforms to our gun laws, and just since this morning, nearly 50,000 people have called Congress demanding a vote.”

“No doubt the gun lobby’s allies will try to subvert the will of the people, but what we’re seeing on the House floor and Capitol steps today makes it clearer than ever – Americans want their representatives to buck the NRA, keep guns out of dangerous hands, and help save lives,” Feinblatt continued.

Those on the other side of the gun debate blasted Democrats for supporting measures such as No Fly/No Buy bills tying Second Amendment rights to secretive government watch lists.

“Democrats in the 1960s used sit-ins to expand Constitutional rights,” Citizens Committee for the Right to Keep and Bear Arms Chairman Alan Gottlieb told Guns.com via email. “But today, they are using a sit-in to restrict those same civil rights.”

Gottlieb held Pelosi and her compatriots no longer represent the ideals of a free society and are trying to obscure the argument on terrorism into one on guns.

“Instead of demanding direct action against dangerous Islamic extremists, they’re distracting the public by pushing gun control measures that they know would not have prevented Orlando, Boston or San Bernardino,” Gottlieb said. “But it creates the deceptive impression that they are doing something, when in fact they are doing less than nothing by trying to penalize the wrong people.”