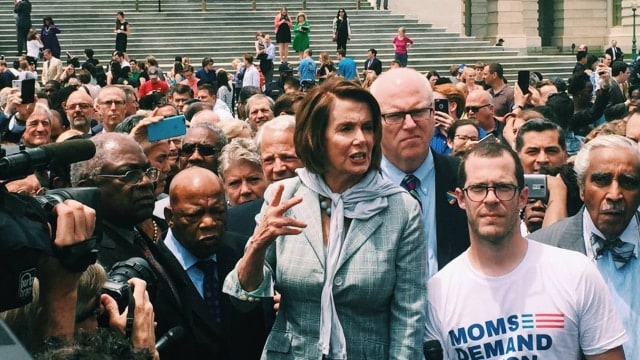 With the House now adjourned for nearly two weeks, Democrats ended their sit-in Thursday but not their fight for more gun control. (Photo: Nancy Pelosi/Facebook)

House Democrats wrapped up their 26-hour protest over gun violence Thursday after the body broke for vacation while the Senate took a cautious first step toward passing a compromise bill.

Originally vowing to keep the lower chamber of Congress in session until a vote was held on gun control proposals, Democrats seized the floor of the House early Wednesday and, though recessed by GOP leaders, gave speeches and held a rally of sorts complete with handheld signs while streaming their actions via social media.

In response, Speaker Paul Ryan closed up shop early Thursday morning after two votes on Zika and fiduciary rules, sending lawmakers on vacation through July 4 and leaving the protesting Democrats in possession of an empty House.

Just after noon on Thursday, Democrats threw in the towel and ended their buffet fortified sit-in but vowed to return after July 5 and pick up where they left off.

“All these struggle because Republicans refused to give us a vote on commonsense gun violence legislation — overwhelmingly supported by the American people. In the case of one bill, 85 percent, the other, 90 percent of the American people,” said Pelosi. “The Republican House should have the courage to keep guns out of the hands of criminals and suspected terrorists.”

Gun control advocates, who supported the sit-in through social media and demonstrations of solidarity, vow the fight is still underway.

“This historic event may have come to a close, but the fight for sensible gun laws is far from over,” said Lucy McBath, faith and outreach leader for Everytown, in a statement to Guns.com.

Republican leaders argue the civil disobedience by chamber Dems is a red herring to distract from failed Obama administration terrorism policies while Ryan told media outlets Thursday that the protest was used as a fundraising scheme, arguing that in the midst of the sit-in many of the lawmakers involved were sending out alerts to raise campaign contributions.

“If this is not a political stunt, why are they trying to raise money off of this — off of a tragedy?” said Ryan.

While the House may have not held a vote this week on gun control, the Senate on Thursday quietly conducted its fifth when lawmakers carried on with a “test vote” on a bipartisan measure to bring increased scrutiny to those on certain watch lists when buying guns. Earlier this week four partisan proposals, two from each party, went down in flames.

The compromise aims to find a middle ground that at least 60 senators can agree on for passage and is backed by Republicans Susan Collins of Maine and Jeff Flake of Arizona as well as North Dakota Democrat Heidi Heitkamp among others.

In the end, however, it was only able to pull down a 52-46 vote, mainly comprised of Democrats, and will be set aside for now.

“Our goal from the beginning has been simple and straightforward: we want to make America safer,” said Collins in a statement. “I’m very encouraged by today’s majority vote in support of our amendment and look forward to continuing to work with my colleagues on both sides of the aisle to advance this vital issue.”

Though Collins’s proposal is more narrowly focused that others the Senate has voted for, it would still deny gun rights to an estimated 109,000 total persons, of which 2,700 are Americans, a violation of due process law that many find unsupportable.

“Constitutionally, it is of no consequence how many or how few are currently on these lists,” reads a statement from the National Shooting Sports Foundation in opposition to the Collins amendment. “There is nothing that would prevent the government from adding anyone that disagrees with it to either the ‘No Fly’ or ‘Selectee’ list.”

Not just pro-gun groups oppose the use of secretive government lists to deny civil rights.

The American Civil Liberties Union opposed both the two partisan no fly/no buy proposals earlier this week and the compromise measure voted on Thursday saying, “The Collins Amendment fails to provide basic due process safeguards and instead would entrench a largely one-sided and secret process that would not result in meaningful judicial review of executive branch decisions.”

Meanwhile, former Presidential candidate and current U.S. Senator from Florida Marco Rubio told local media this week he is working on a gun control proposal of his own.