Wilson combat lightens up with new 1911 in three calibers 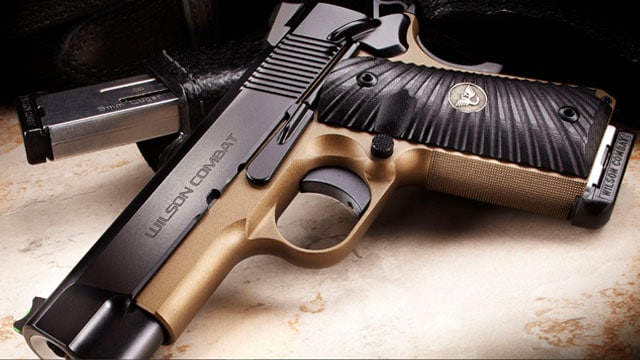 The Arkansas gun maker unveiled the Ultralight Carry Compact, an aluminum-frame version of its compact pistol line. It also has an aluminum mainspring housing. At 26.5 ounces unloaded, it’s 14 percent lighter than a steel model.

In appearance, the pistol was made to be admired, not concealed. A bronze-colored frame contrasts with black grips, slide, trigger, and other hardware.

Though the frame, except for the barrel, is full size, comfortable carry features are machined into the design. Wilson Combat’s round butt frame, trademarked Bullet Proof beavertail grip safety and hammer, a contoured magazine well, countersunk slide stop, and the company’s customary carry cuts are included.

It may be compact, but should have plenty of grip traction with G10 starburst grips, 30 LPI slide top serrations, 40 LPI rear slide serrations, and a 30 LPI high-cut checkered frontstrap.

Trigger pull is a crisp 3.5 to 4.5 pounds. The trigger has a medium length pad.

The barrel is stainless, match grade cone with a flush cut and reverse crown. Barrel and chamber are both fluted.

Current price on the Ultralight Carry Compact is $3,650. The company reminds shoppers that market conditions can cause fluctuations up or down from the published price.