California gun ballot initiative will be sent to voters in November 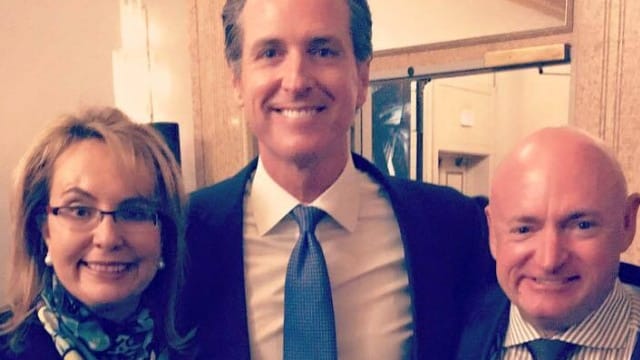 Gavin Newsom has been increasingly chummy with gun control advocates as his voter referendum on firearms and ammo regulations in the state races to voters. (Photo: Gavin Newsom Facebook)

Lt. Gov. Gavin Newsom’s proposed California Safety for All Act — viewed by some as the mother of all gun grabs — has been certified to appear on ballots in the upcoming general election.

Newsom, currently running to replace fellow Democrat Gov. Jerry Brown in 2018, has a five-point list of gun control measures that he has been pushing since October.

With some 600,000 signatures delivered in April, on June 23 California Secretary of State Alex Padilla announced the Newsom voter referendum is eligible for the ballot.

“Enough massacres, death, tears, and hate – it’s time to take action and save lives,” said Newsom in a statement following the announcement. “America has too many guns and too much hate. The result is the massacre in Orlando, and dozens of other gun deaths every single day.”

The package before California voters include an end to grandfathering of magazines capable of holding more than 10 rounds, relinquishment of weapons by those prohibited by the state from legal possession and mandatory reporting of lost or stolen guns. In addition, it would require background checks prior to all ammunition sales – a first for any state.

The Lieutenant Governor has been resolute in his advocacy for adding more gun regulation to the country’s most populous state, where one in nine Americans reside.

Newsom’s Facebook and Twitter feeds are almost non-stop messages for gun control, going so far as to post mini-biographies daily for each victim in the recent Orlando shooting along with a countdown to November’s election. Last week he turned his social media feed briefly over to former U.S. Rep. Gabby Giffords and Capt. Mark Kelley to stump for their Americans for Responsible Solutions group. At the same time, he has not lost time chiding the National Rifle Association and even a trans woman with strong feelings on the Second Amendment.

Gun rights advocates, who have banded together to form the Coalition for Civil Liberties and set up a dedicated website, StopTheAmmoGrab.com, in an effort to solidify opposition against Newsom’s voter referendum, say the move is wrong for California.

“Californians believe in more civil liberties, not fewer freedoms,” CCL co-chair Chuck Michel told Guns.com in a statement. “Gavin Newsom’s political maneuver will be defeated because it does nothing to stop the next ISIS-inspired attack.”

Last week, following an amendment to a bill currently part of De Leon’s legislative package that would modify Newsom’s own referendum should it pass, a spokesman for Newsom told the Sacramento Bee that the Senate President was a “self-serving cynic completely consumed with petty personal grudges.”

The election is set for Nov. 8.