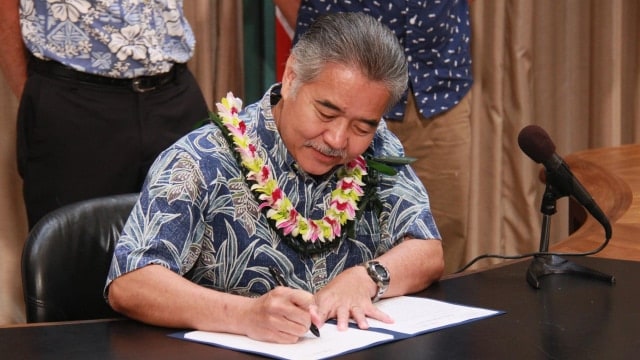 Hawaii’s Gov. David Ige gave his seal of approval to a three-pack of new gun laws, one of which gun rights supporters caution may be illegal. (Photo: Gov. Ige Facebook)

The bills, introduced in the Democrat-heavy state legislature, passed the body with broad support. The most striking of the trio is one that will link Hawaii’s gun lists with the Federal Bureau of Investigation’s “Rap Back” program. Supporters of the legislation, the first of its kind in the nation, argue it is needed to help notify local authorities in cases of a gun owner running afoul of the law outside of Hawaii.

“This is about our community’s safety and responsible gun ownership,” said Ige in a statement. “This system will better enable our law enforcement agencies to ensure the security of all Hawai‘i residents and visitors to our islands. This bill has undergone a rigorous legal review process by our Attorney General’s office and we have determined that it is our responsibility to approve this measure for the sake of our children and families.”

The new law, which passed nearly unanimously as SB 2954, directs that all of Hawaii’s gun owners be put into a federal biometric database, managed by the FBI, for continuous monitoring. As part of this initiative, the Rap Back program would issue authorized agencies with notification of criminal, and, in some cases, civil activity of those in the database. It would also direct the Hawaii Criminal Justice Data Center to access firearm registration data for that purpose.

So, for instance, if a Honolulu gun owner is arrested in New York, the FBI would notify Honolulu police who would then make a decision on the validity of the owner’s gun permit – required by law in the state for possessing a firearm.

The Rap Back program was developed to keep tabs on those in public trust positions, such as teachers and public transportation employees, as well as individuals under criminal investigation, and was not designed from the outset to be used to store lists of registered gun owners.

The Firearms Owners’ Protection Act, signed into law by President Ronald Reagan in 1986, specifically bans the establishment of any federal system of registration of firearms, firearm owners, or firearm transactions.

“It states that the Federal Government will not be able to maintain a database on gun owners, and that’s exactly what this is,” HRA Board Member Bill Richter told local media. “It’s a biometric database maintained by the FBI. So every time a gun owner goes in to register a new gun after purchase, they’ll be entered into this ‘Rap Back’ system … and we’re just kind of waiting to see what the Attorney General says.”

Besides the Senate Rap Back bill, Ige on Thursday lent his signature to a pair of House measures limiting firearms ownership and expanding mandatory gun surrender guidelines.

House Bill 625 which passed 40-10 in that body and 22-2 in the Senate, adds misdemeanor harassment by stalking and sexual assault in the fourth degree to the list of crimes that disqualify a person from owning, possessing, or controlling any firearm or ammunition in the state.

Ige’s signature on the new law, which will make Hawaii’s one of the strongest in the nation, was applauded by gun control champions.

“This is a major victory for common sense and another defeat for the gun lobby,” said former U.S. Rep. Gabby Giffords in a statement issued through her Americans for Responsible Solutions group. “Republicans and Democrats came together to do the responsible thing: make commonsense changes to Hawaii’s laws that respect the rights of law-abiding Hawaiians, will help guns out of the hands of dangerous people, and make Hawaii a safer place to live.”

The final measure, HB 2632, passed the House 35-16 and the Senate 22-2 and enhances the other two proposals signed into law by requiring any gun owner ruled unable to possess firearms or ammunition to immediately hand them in to police, who would be authorized to seize them if the person does not voluntarily comply.