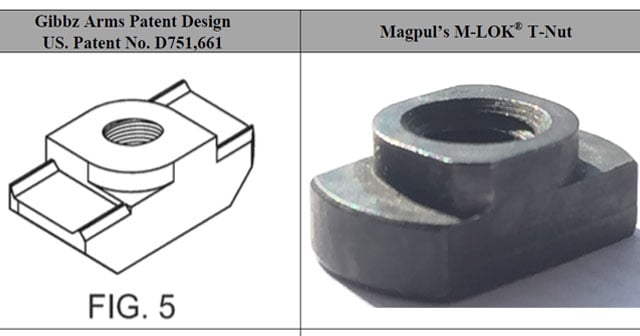 A court date has been set for the ongoing patent suit by Magpul over alleged infringements involving its M-Lok and related accessory attachment devices.

A federal judge signed off on a final hearing order to determine whether the Mesa-based Gibbz Arms infringed on Magpul patents. The jury trial, which is slated to occur without live testimony, is scheduled for June 2017, with the exact date yet to be determined.

The terms of the order include an elaborate schedule of deliverables germane to the case, which has spurred counter-claims from Gibbz. These claims are also being contested by Magpul as part of a complicated, evolving series of legal actions.

Apparently realizing that sharing some of the records demanded by the court may expose future products details outside the company, Magpul filed for and was issued an Order of Protection, which covers both companies’ materials in the legal proceedings. It requires that each party identify and mark confidential aspects of each piece of evidence submitted, so that future products cannot be exploited to either party’s disadvantage.

Another new action by the court requires Magpul to file a maximum five-page summary of alleged patent infringements, to include exhibitions showing the specific patents allegedly violated. That summary must be delivered within 30 days of the order.

In turn, Gibbz is required to respond to Magpul’s brief summary of charges within 45 days of June 17. The court again demands a maximum five-page summary here, the topic limited to why Gibbz feels their products do not infringe.

The court’s June 17 action includes a series of winter deadlines for both plaintiff and defendant. Each must submit a maximum 20-page narrative, a five-page response to the other company’s narrative, and visual charts in preparation for a pre-trial hearing on Feb. 1.

In its research process, Magpul discovered that a nut design patented by Gibbz Arms is possibly “prior art,” the term for a previously patented design. In their original suit, Magpul claimed infringement on its own M-Lock T-nut design, but appears to be changing course on this aspect of the proceedings.

In patent drawings, the Magpul M-Lok T-nut does appear substantially different from the Gibbz patented nut. However, a drawing of a patented nut by Velten, which pre-dates the lawsuit, appears to be Gibbz’ exact design, pictured in reverse. Documents submitted to the court by Magpul in June express hope that the Gibbz nut design will be “rendered obvious.”