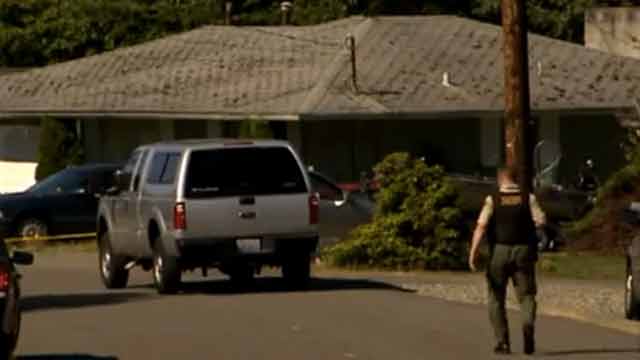 One neighbor said a gun was stolen from that same house during a break-in several years ago. (Photo: Q13 Fox)

An early morning home invasion at a home in Everett, Washington, Saturday ended with one suspect dead and another injured.

Police say just before 5 a.m., two suspects kicked in the front door to gain entry into the residence. The suspects, who were wearing masks, apparently shot pepper spray as they announced a robbery, according to a press release from the Snohomish County Sheriff’s Office.

However, another resident, who was in a different room at the time, heard the commotion and believed his roommates were being held-up at gunpoint. He grabbed his own gun and went to intervene. The roommate confronted the intruders and opened fire before calling 911 as the suspects fled on foot.

Officers arrived on the scene within minutes and soon thereafter located one of the intruders. That suspect had been shot an undisclosed number of times. Paramedics pronounced him dead at the scene.

The second suspect was nowhere to be found and a search by law enforcement, which included K-9 units, was unsuccessful. However, for reasons which were not revealed, authorities said they believe the second suspect was injured. They have advised area hospitals to be alert to the possibility of the suspect seeking medical treatment. Unfortunately, the victims were unable to provide a description of the second suspect.

The Snohomish County Sheriff’s Office confirmed that guns were recovered from the scene, but did not indicate if they belonged to the armed resident or the suspects. Authorities did, however, say the roommate is fully cooperating with the investigation and is not facing any charges at this time.

Police said the victims and the suspects were not acquainted and the motive behind the break-in appeared to be a robbery.

Mike Ryan lives a few doors down from where the attempted robbery occurred. He told reporters it’s unsettling to hear of such activity in their neighborhood. Ryan also told reporters that he personally doesn’t own a gun.

“If I had one and I had someone coming at me,” he pondered, “I’m not sure what I would do.”