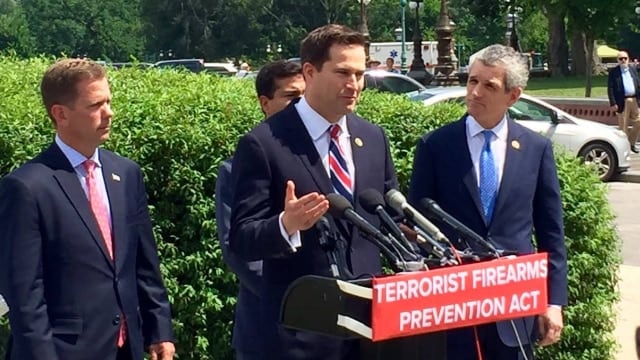 A group of moderate lawmakers from both parties joined forces last week to introduce a bill to bring increased scrutiny to those on certain watch lists when buying guns.

A close copy of a similar measure proposed in the deadlocked Senate, the proposal aims to draw from a smaller list of individuals than other more sweeping bills that could have amounted to as many as a million names. A South Florida Republican Rep. Carlos Curbelo, joined by seven other legislators including five Democrats, sponsors it.

“After the horrific massacre in Orlando, and countless other mass shootings across the country, the American people want answers,” Curbelo said in a press conference Friday. “Congress must act, at the very least, to ensure individuals on the No-Fly list and Selectee list cannot purchase a firearm. This legislation does just that and ensures due process for law-abiding citizens.”

The Terrorist Firearms Prevention Act, introduced Friday as H.R.5576, would use membership on either of the two smaller surveillance lists to allow the attorney general to deny gun transfers. The lists the proposal would draw from currently comprise 109,000 total persons, of which 2,700 are Americans. Those who are denied would be able to appeal the decision.

It also gives the Justice Department discretion to allow sales to flagged individuals to proceed with transfers to preserve on-going investigations.

Further, it allows a “look-back” provision to monitor gun purchases made up to five years after an individual is removed from the list. This final act will extend to those across the broader Terrorist Screening Database as a whole.

The proposal came just a day after Speaker Paul Ryan recessed Congress’s lower chamber and House Dems brought to a close a 26-hour sit-in on the floor of the Capitol.

With the House in recess until July 5, lawmakers are taking advantage of their vacation to assure their constituents back home that they are hard at work passing new gun control regulations with Rep. Diana Degette holding a rally in Denver and Rep. David Cicilline, who has an assault weapon ban proposal pending, announcing events in Rhode Island. This ties in with a National Day of Action called for on June 29 in a letter signed by signed by Cicilline along with U.S. Reps. Katherine Clark, Robin Kelly, John Larson, John Lewis and Mike Thompson.

“People are calling for action, rightful action,” Rep. Paul Tonko, D-NY, told local media. “If you call that a stunt, you know, see it for what it is, a human outcry. Certainly a passionate plea, and most definitely rightful indignation for lack of progress, for lack of respect shown.”

The bill has been referred to the House Committee on the Judiciary; however, Democrat leadership is promising to try to move on floor votes as soon as possible with Minority Whip Steny Hoyer, D-Md., vowing not to stand down.

A 52-46 test vote was held last week on the bill’s Senate companion, falling short of the 60-vote threshold needed to pass.