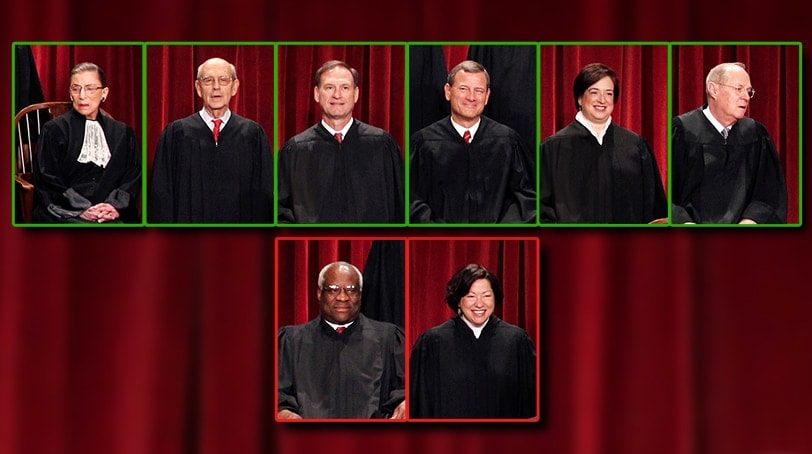 In what’s being hailed as a victory for women’s safety, the Supreme Court on Monday made it more difficult for domestic abusers to own guns.

The 6-2 ruling handed down by the highest court in Voisine v. United States upheld a lower court’s decision to prohibit people convicted of misdemeanor domestic abuse from purchasing and possessing guns.

Elizabeth Avore, legal director of Everytown for Gun Safety, called the opinion “a victory for public safety, and especially for the women and children most commonly affected by domestic violence.”

Access to a gun, Avore said in a statement, is often what turns domestic abuse into murder.

The group, which filed an amicus brief in January, pointed to its domestic abuse research, which found the presence of a gun in that type of scenario makes it five times more likely a woman will be killed.

“That’s why the Supreme Court’s rejection of dangerous arguments that would have eviscerated federal gun laws and allowed dangerous convicted abusers to legally possess guns in more than two-thirds of states is so significant,” Avore said.

One argument presented in two cases merged to contest a 1996 federal law held that those people who “recklessly” harm their partner shouldn’t be barred from gun ownership, but that the prohibition should come for those who “intentionally” cause harm.

The Supreme Court chose to hear the case in late October, which marked the first time in 10 years Justice Thomas delivered any remarks.

“Can you think of another constitutional right that can be suspended based upon a misdemeanor violation of a state law?” Thomas asked Justice Department lawyer Ilana Eisenstein, according to the court transcript.

As Eisenstein attempted to work out her answer, Thomas continued.

“You’re saying that recklessness is sufficient to trigger a violation ­­misdemeanor violation of domestic conduct that results in a lifetime ban on possession of a gun, which, at least as of now, is still a constitutional right,” Thomas said.

He asked again if the lawyer could think of another constitutional right subject to suspension based on a misdemeanor violation of a state law, to which Eisenstein was unable to find a specific example, but offered the First Amendment can be limited where there is a “compelling interest and risks associated.”

Yelling fire in a crowded theater is a popular example of the suspension of the right to free speech.

The men who brought the initial suits were Stephen L. Voisine and William E. Armstrong, who were both charged and convicted of firearms possession after having been convicted of domestic assault where police found the men with firearms.

Pro-gun legal experts warn the court’s opinion is vague and could cause unintentional ripples, affecting more than just domestic abusers.

“The issue here isn’t with the concept of at least temporarily removing the right of convicted domestic abusers to keep and buy guns,” said Brandon Combs, president of the Firearms Policy Coalition, in an email to Guns.com. “The problem with this decision is that it’s incredibly broad and may lead to a massive expansion of qualifying convictions that become prohibiting offenses, potentially even retrospectively.”

Combs said “anti-gun” jurisdictions like California, New Jersey and Maryland could move to “vastly expand” the classes of people prohibited from possessing or purchasing firearms.

“Apparently the Supreme Court is too concerned with other things to be counted on to protect fundamental, individual Second Amendment rights,” Combs said. “This decision and so many others are a reminder to get out and vote for gun rights in this year’s general election.”

Combs referred to the perceived 4-4 split on the liberal-conservative bench, which may not have done much in this case had there been an additional pro-gun justice. The death of Second Amendment champion Justice Antonin Scalia left a void in the Supreme Court for the gun rights community, but even if he were alive to vote and be able to compel one of his colleagues to vote against the domestic abuse case, the split would still have been 5-4.

However, with Scalia’s vacancy yet to be determined by the next president and several justices advancing in age, the gun rights community is fearful of a two-term Hillary Clinton presidency.