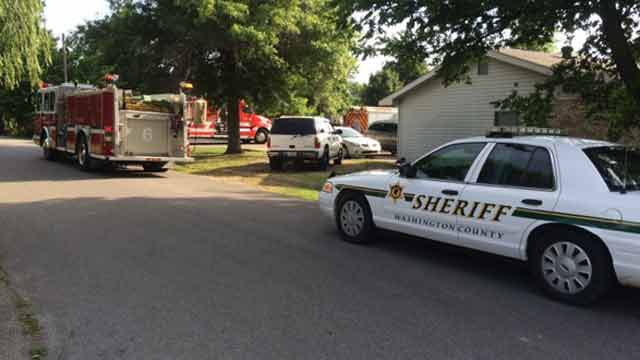 As officers tried to talk the man down, the fire he had set was growing behind him and firefighters were unable to get to it. (Photo: KSFM)

A multi-agency investigation is underway after a man was shot and killed following an armed standoff Friday evening outside of his home in Farmington, Arkansas.

The incident started when authorities received a call from a concerned citizen just after 5 p.m. The caller said a man was seen pouring lighter fluid around a shed near his home and throughout his yard, then set it all on fire.

Officers from the Farmington Police Department responded to the call and were on the scene within two minutes. Once they arrived, they saw the suspect was armed with both a handgun and a rifle. At that point, the officers on the scene radioed for back-up and several law enforcement agencies responded, according to a statement by the Washington County Sheriff’s Office.

Officers attempted to talk with the man and get him to put his guns down, but were unsuccessful. During this time, the man reportedly placed the handgun to his head numerous times.

About five minutes after the first officers arrived, the suspect opened fire on authorities. No one was injured, and officers continued to try to keep the situation from further escalating through a number of non-lethal methods, all of which were unsuccessful.

However, when the suspect raised his gun and aimed it at officers for a second time, law enforcement officials responded with gunfire.

Neighbor James Goett initially thought the seven or eight gunshots were fireworks, but moments after the noise, another neighbor ran to his house and informed him of what was happening.

“The cops did what they had to do,” Goett told reporters. “And he got what was coming to him.”

The suspect, who was later identified as Randy Blecher, 50, was transported to the hospital, where he was pronounced dead.

County records show Blecher shared the home with his wife, Alma, but records also show Alma filed a protective order against Blecher on behalf of a minor the same day the arson and shooting occurred.

The officers involved in the shooting have been placed on administrative leave, as is standard protocol in an officer-involved shooting.