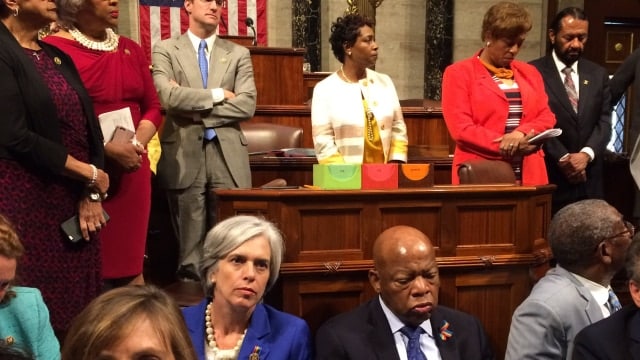 The Foundation for Accountability and Civic Trust filed an official complaint with the Office of Congressional Ethics over emails sent by House Democrats during last week’s gun control protest.

FACT, which bills itself as a non-partisan non-profit group, is run by a Matthew Whitaker, a former U.S. Attorney who had an unsuccessful bid as a Republican U.S. Senate candidate for Iowa in 2014. Whitaker has also in the past filed complaints about Hillary Clinton and recently demanded that Harvard release papers concerning Supreme Court nominee Merrick Garland. In the group’s most recent filing, the group contends several House members violated ethics rules during their 26-hour sit-in.

“There is broad agreement that numerous rules were broken. One of the rules prohibits Members from soliciting campaign and political donations tied to acts taken in their official capacity,” reads a statement from the group. “It is outrageous that these Members expect the citizens to follow all the laws they pass, but they can’t even bother to follow their own ethics rules.”

As outlined in the 20-page complaint filled with copies of emails sent by U.S. Reps. Jarred Huffman, John Lewis, Ben Lujan, Nancy Pelosi and the Democratic Congressional Campaign Committee, FACT argues that solicitation for campaign contributions were made with images taken of the lawmakers in their official capacity in the House. This is a violation of Congressional rules prohibiting members from using images “linked to an action or to be taken by a Member in his or her official capacity” in seeking contributions.

One email, purported to have been sent by Lujan’s campaign, asks for $24 contributions explained as “$1 for every hour we’ve been in the well of the House Chamber demanding action” next to an image of assembled Democrats crowding the Speaker’s podium credited to “House Television.”

Another, from the DCCC, states that all donations made during the sit-in would be “triple matched” by an unnamed group of “Democratic all-stars” under a heading showing Rep. John Lewis and quoting his remarks during the protest.

At least one long-term House Democrat went against the grain and disagreed with the actions of some who sought donations during the sit-in.

“Frankly I wish they hadn’t,” said Rep. John Larson, D-Conn., as reported by the Hartford Courant. “I don’t think they should have.”

Republican House Speaker Paul Ryan told media outlets even before FACT’s compliant that the protest was used as a fundraising scheme, saying, “If this is not a political stunt, why are they trying to raise money off of this — off of a tragedy?”

Gun rights advocates welcomed the news of the complaint.

With the House on recess until July 5, some 50 Democrats — including Lewis, Pelosi and Lujan — are backing a National Day of Action in their home districts on Wednesday to raise awareness and urge Congress to pass gun control legislation.

As for the ethics complaint, USA Today reported that Drew Hammill with Pelosi’s office dismissed the allegations as “ridiculous and without merit.”