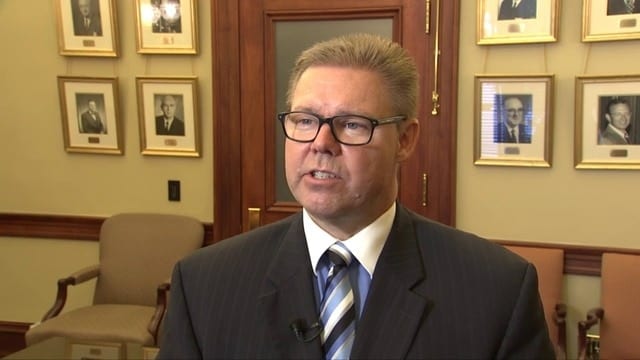 State Sen. Richard Alloway, R-Adams, has reintroduced a measure to allow organizations such as the NRA to stand in for local Pennsylvania citizens in lawsuits over illegal gun laws. (Photo: senatoralloway.com)

A bill working its way through the state Senate aims to allow advocacy groups to challenge local firearms ordinances in court, though just such a provision was recently stricken.

The measure, backed by Republicans, was introduced in June and passed the Senate Local Government Committee with an 8-3 vote on Monday. It aims to allow gun rights organizations to stand in for local citizens when contesting county and municipal gun laws that are in excess of those in effect at the state level. Backers argue it will ensure that the ownership, transportation and use of firearms in Pennsylvania are consistent in communities across the state.

“My bill would prevent municipalities from creating their own hodgepodge of restrictive gun ordinances that can essentially make criminals out of even the most well-meaning and responsible gun owners,” said state Sen. Richard Alloway, R-Adams, in a statement from his office.

Alloway’s proposal, SB 1330, aims to expand protections of Pennsylvania state preemption over firearms and ammunition regulations to prevent local jurisdictions from imposing ordinances more restrictive than laws passed by the state legislature. The expansion would be to recognize a “membership organization” as having the right to challenge those laws as a plaintiff in place of an area resident who would have to show how they were harmed.

As such, it is a near copy of Act 192, passed in 2014 that led to a volley of lawsuits by gun rights groups against cities large and small, many of whom rapidly scrapped their overreaching ordinances. However, a legal challenge mounted by Democrat lawmakers and mayors upended Act 192 this month on the grounds that it was passed as an amendment to a metal theft bill, violating the state’s single-subject rule for legislation.

In Easton, Mayor Sal Panto, Jr. told council members he intends to propose ordinances on mandatory reporting for stolen guns as well as a ban on firearms on city property.

“We had to change our parks rules to say ‘no discharging of weapons in city parks’ but you can certainly openly carry, and that scares the heck out of little kids,” Panto said at last week’s meeting, as reported by local media.

The National Rifle Association supports Alloway’s preemption bill, arguing that under current law many cities have gone too far.

“A myriad of local firearm laws makes compliance very difficult and nearly impossible for responsible gun owners,” reads an alert from the NRA’s Institute for Legislative Action. “This creates a situation where gun owners and sportsmen have difficulty even knowing about certain laws, much less understanding them. SB 1330 will correct the problem by preventing localities from imposing ordinances more restrictive than laws passed by the Pennsylvania Legislature.”

The measure will now proceed to the Senate floor where a favorable vote will send it to the House. While both chambers of the General Assembly are under the firm control of the GOP, some bipartisan support will be needed to make the bill veto-proof against current Gov. Tom Wolf, a Democrat who was “F” rated by the NRA as being anti-gun.