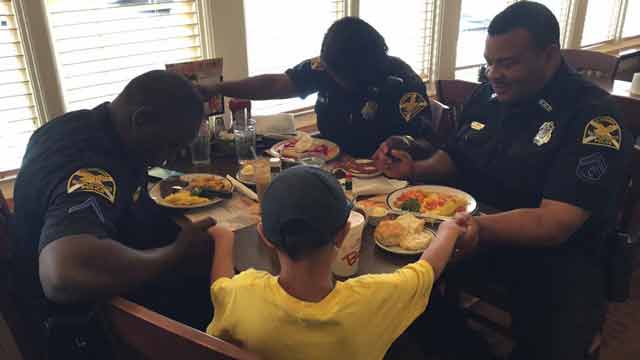 A 6-year-old boy took a minute out of his day while at a St. Petersburg restaurant Monday to pray with a group of police officers who were at the same restaurant having breakfast.

Kelly Garza said her son, Joshua, had just finished up his swimming lessons when they decided to stop at Bob Evans to eat. Three police officers came in while Joshua and his mother were still there, and after Joshua saw the manager of the restaurant shake hands with one of the officers and thank him for his service, Joshua presented a gesture of his own.

As the boy and his mother were leaving, Joshua stopped at the officers’ table and asked if he could pray with him. The four joined hands and the young boy prayed as his mother stepped back to give him a bit of privacy. It was then that she snapped a photo of the precious moment. The prayer ended with the boy saying, “And please help us all to live a good life.”

“He knows what’s going on in the world, and he doesn’t like it,” Garza said of her son, adding that he has also prayed for the families of the victims after he learned of the Orlando shooting.

Garza said after his gesture Monday, there was not a dry eye in the entire restaurant.