CEO of BulletSafe body armor deflects 'Made in China' accusations 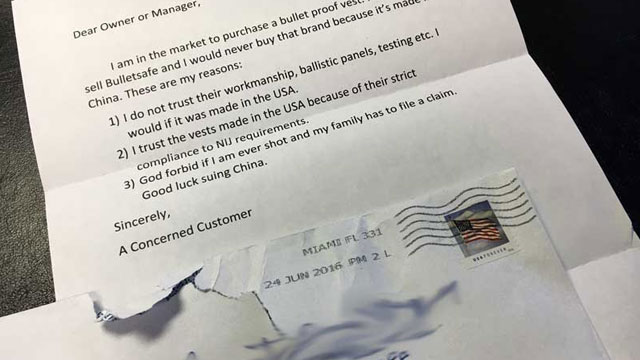 The message sent to some BulletSafe product dealers. (Photo: BulletSafe)

Michigan-based bulletproof vest and hat company, BulletSafe, is firing back at a series of letters containing what it says are spurious claims regarding the company’s China-made products.

An email sent Wednesday from BulletSafe CEO Tom Nardone says the letters, which were received by some product dealers, are fake. The email shows two letters, apparently hand-addressed, but identical on the inside.

The letter states: “I would never buy [BulletSafe] brand, because it’s made in China.” It also expresses concern for manufacturing standards and product liability.

Whatever the source of the letters, Nardone is, in true entrepreneurial fashion, seizing the opportunity they offer to educate consumers and promote products.

Yes, the vests are made in China, his response says, “by hardworking folks that do a great job. We give every vest a hands-on final inspection here in our warehouse…,” and so on, concluding that the vests are of equivalent quality to USA-made vests but more accessible at less than half the price.

Nardone’s correspondence also states the company carries a million dollars of liability insurance on the vests. That insurance covers both BulletSafe and parent company, PriveCo, of which he is president.

PriveCo purports to operate 10 websites offering discreet shopping for the world’s most embarrassing products, including hair loss medication and vibrators.  It’s not clear what’s so embarrassing about body armor.