NRA hoax page removed along with 38,000 others 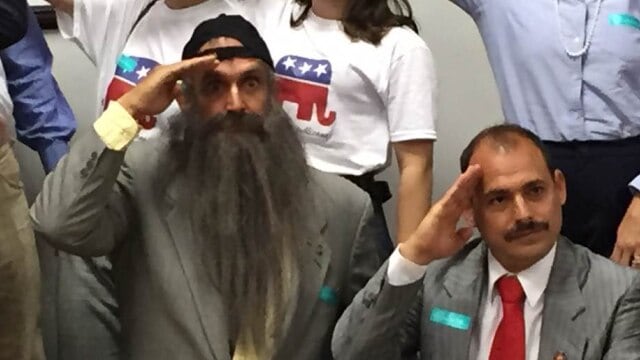 Yes Men “Jacques Servin” and “Igor Vamos” during their tenure as part of the spoof “Share the Safety” campaign which parodied a NRA endeavor. (Photo: Facebook)

Last week a group of social influencers posted an elaborate spoof involving Smith & Wesson and the National Rifle Association which led to a good chunk of the internet getting pulled.

Complete with a very official-looking statement and press release the hoaxers unveiled the “Share the Safety” program that promised that, for every select Smith & Wesson handgun sold, a second one will be donated to urban youth.

The project was put on by The Yes Men, a culture jamming duo composed of Jacques Servin and Igor Vamos who have created a number of similar spoofs as part of their campaign to affect social change.

As reported by Motherboard, complaints by the NRA led a good part of the web publishing platform Surge which hosted the Share the Safety website to go dark for a bit– along with 38,000 others.

Surge, registered in the tiny volcanic island of Saint Helena and hosted by DigitalOcean through Cloudflare, took to social media to defend themselves

1) Here is what has happened: the NRA apparently filed a complaint with cloudflare over a parody site hosted on surge.

…after asking for counterclaim documents minutes after getting off the phone we were instead shutdown because they had changed their mind.

Nothing but radio silence from @digitalocean while 38k sites remain down. Demoralizing.

It’s not just Surge that felt the burn, apparently.

Three pieces of flotsam remain from the campaign: the YouTube account with two videos, spokesman Hensley Crocker’s Facebook page and the fake nrapress.org site which mirrors the NRA-ILA’s page down to the header, footer and click bait.

At least for now.

On June 23rd, we received notice from the NRA’s counsel that sharethesafety.org was infringing NRA’s trademarks. The NRA demanded that we remedy the problem by removing the material. In response, we followed our standard procedures for trademark infringement notices and informed the customer immediately of the NRA’s demands. We provided more than 5 days for the customer to respond to or resolve the issue. We also spoke to the customer on several occasions to inform them that we intended to take action on the trademark claim. They chose not to remove the violating material. Accordingly, our Trust & Safety team restricted network access to their Droplet, which caused an outage to all of their user’s websites hosted on that Droplet. In less than 2 hours of the outage, the customer was able to address the trademark notice, and network access was immediately restored.