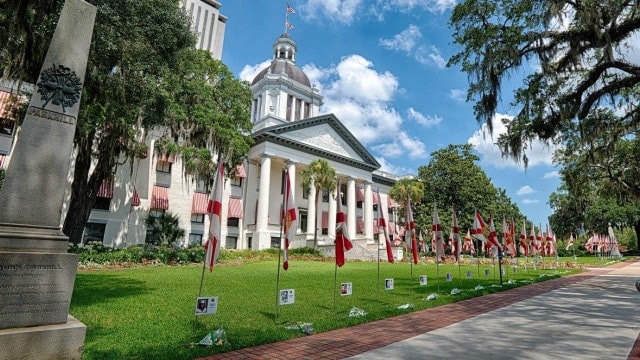 The Florida Capitol in Tallahassee has been memorialized with the images of the slain Orlando terror victims, but it remains to be seen if the body will reconvene to discuss gun control. (Photo: Andy Gardiner Facebook)

Florida’s Republican Gov. Rick Scott on Wednesday said he would not call a special session to debate gun laws as requested by lawmakers in the wake of the Orlando terror attack.

Soon after the incident which left 49 dead at Pulse, a gay nightclub, a number of Orlando-area Dems called for the state legislature to resume its session which ended in March for the purpose of considering new gun control proposals. However, Senate President Andy Gardiner, R-Orlando, expressed little appetite to call the body back into session and has given a nod to the fact that the two senators behind the call are running for greater political office.

This has not stopped lawmakers from presenting the Florida Secretary of State with 46 letters demanding the state’s legislators be polled on their feelings to resume. A three-fifths majority would be needed for such an event.

On Wednesday, Scott weighed in on the matter, telling those seeking the extraordinary session their push is misplaced.

The state’s chief executive went on to say that, even if lawmakers send controversial anti-gun measures to his desk, they risk strict review.

“Anything that makes it through the Legislature, I’ll review. Here’s what doesn’t make sense to me, why aren’t we focused on the culprit, the evil here? It’s ISIS. It’s radical Islam,” Scott said.

Scott has been involved the response to the terror attack, vowing to devote every resource at the state’s disposal, declaring a state of emergency in Orange County; activating the Florida Disaster Fund to provide financial support to organizations that serve survivors, their families, and all those in need; and decorating the officers who responded to the incident.

“It is unthinkable that President Obama does not define this as an emergency,” said Scott. “We are committing every state resource possible to help the victims and the community heal and we expect the same from the federal government.”