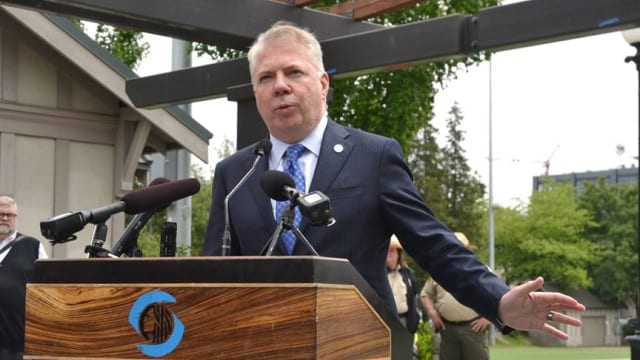 Mayor Ed Murray feels destroying the guns is the right thing to do despite the fact he wants to raise taxes to help fund an increase in the Seattle Police Department. (Photo: Mayor Murray’s Office)

Although Mayor Ed Murray is seeking to increase taxes and fees on Seattle businesses to help fund the police department, he wants to scrap their surplus Glocks to save lives.

With Seattle growing, a police staffing study commissioned by the city recommended hiring some 200 new officers as well as fill a number of vacant positions to bring the department to an all-time high of 1,464 officers by 2019. To help generate some $23 million needed for this goal, Murray wants to raise Business and Occupation (B&O) tax rates and increase the City’s Business License fees.

“This is a balanced proposal that ensures that the Seattle Police Department will have sufficient staffing to meet the public safety needs of our growing city,” said Murray in a statement issued by his office this month. “Residents, businesses, and experts agree that we must increase investments in our police department, hire additional officers, and enhance community engagement.”

However, one source of revenue that has traditionally been open to SPD– selling surplus firearms to licensed firearms dealers– will be cut off by a separate move from Murray.

The Seattle City Council on Monday unanimously approved a measure proposed by the Mayor to pay to melt down those guns instead.

Murray’s ordinance, Res 31676, will restrict resale of retired Glocks no longer used by the City to other law enforcement entities only. Further, it would require that any firearms dealer wanting to sell replacement guns to Seattle would have to supply their ATF inspection reports so that procurement could be made from “responsible” sources.

A fiscal note attached to the measure anticipated that the move could cost the city $30,000 per year for at least the next three years.

As reported by KIRO 7 this week, Murray fully intends to see the guns ruined, despite the provision to sell them to other agencies, in a symbolic effort to prevent gun violence.

“We’re going to take the guns and destroy the guns,” he said. “They’re not going to be resold anywhere.”

Second Amendment advocates were shocked at the decision, arguing that the guns have traditionally been sold or traded in to licensed firearms dealers who are mandated to conduct background checks on further transfers.

“Ed Murray is a gun-hating extremist who is using his political position to wage war against firearms and the people who own them,” Citizens Committee for the Right to Keep and Bear Arms Chairman Alan Gottlieb said in an email to Guns.com. “It is especially egregious because he knows this is not going to prevent a single crime.”

Gottlieb advised he intended to seek redress with state lawmakers.

“Because of Mayor Murray’s willful disregard for public property,” said Gottlieb, “we are today calling on the State Legislature to withhold funding in that amount from some city program. It is a public outrage that Murray and the City Council put symbolism over financial responsibility. With such an attitude, he does not belong in public office.”

Murray, a member of Michael Bloomberg’s Mayor’s Against Illegal Guns organization, signed legislation last year to impose a “gun violence tax” on gun and ammo sales within city limits of up to $25 per firearm and require the reporting of lost or stolen guns within 24 hours under penalty of law, triggering a lawsuit from gun rights groups.