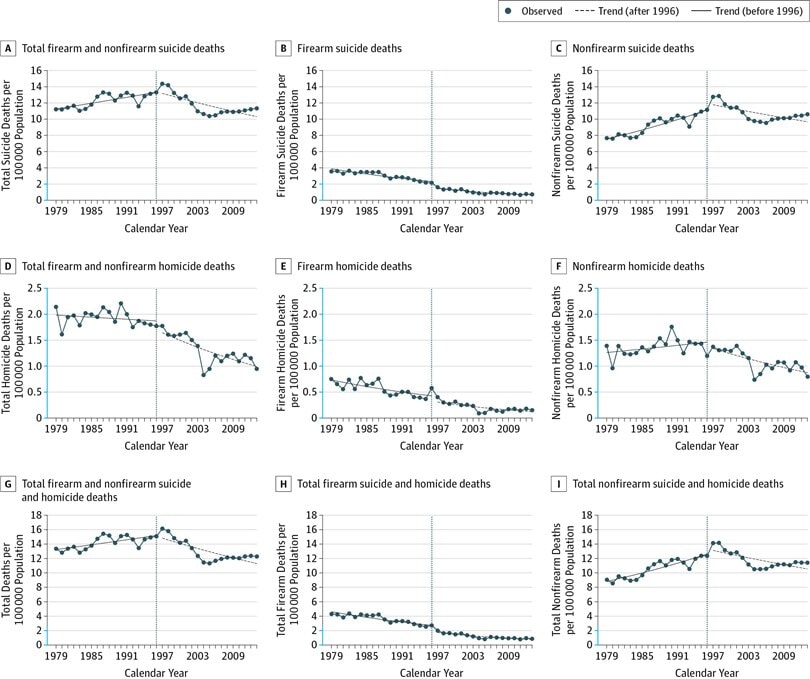 Australia has seen a decline in homicides and suicides since the 1996 ban on semiautomatic firearms, but it may not be the result of strict gun laws.

As the rate of gun deaths declined in Australia, so did rates of non-firearm suicides and homicides, according to a study published in the June issue of The Journal of the American Medical Association.

Since the declining rates followed the same timeline, “it is not possible to determine whether the change in firearm deaths can be attributed to the gun law reforms,” the study says.

As to what exactly caused the change, one of the authors of the study, Simon Chapman, PhD,  University of Sydney, shared two hypotheses in an interview with JAMA.

The first may be the result of fewer available guns or attempts with guns. “When you shoot yourself with a firearm or shoot somebody else … the completion rate is very high compared to other methods,” he said. “So if you put a gun to your head in a suicide attempt the completion rate in Australia is about 74 percent of people will die.”

“Whereas with other methods the completion rate is considerably less. Things like trying to gas yourself, kill yourself with car exhaust or swallowing medication or household poisons or things like that — far less death rate,” he added.

The other reason may be the ubiquity of cell phones. “When a person prior to say 1976 may have seen a violent incident they would probably call the ambulance and the police on a landline and that may take some time to get to a landline to do it. Whereas a cell phone, everyone’s got them in their pocket,” he said, adding it’s plausible people get to hospitals quicker because there’s more immediate communication with first responders.

The study also found that mass shootings — the exact reason gun bans were enacted — in Australia amounted to zero after 1996. In the 18 years before, Australia experienced 13 incidents where five or more people were killed with a gun.

After a massacre on April 28, 1996, in which a man used two semi-auto rifles to kill 35 people and wound 19 others, the Australian government introduced sweeping gun laws across the country. In the following seven years, the government held mandatory gun buybacks of prohibited firearms that included semi-auto and pump-action rifles and shotguns, and handguns, and enforced criminal penalties for the non-compliant.

Critics of the gun ban point to a spike in the rate of other violent crime following its enactment. However, supporters would refer to a study by the Australian Institute of Criminology that shows the rate beginning a sharp decline in 2001 and continuing the trend through 2012.