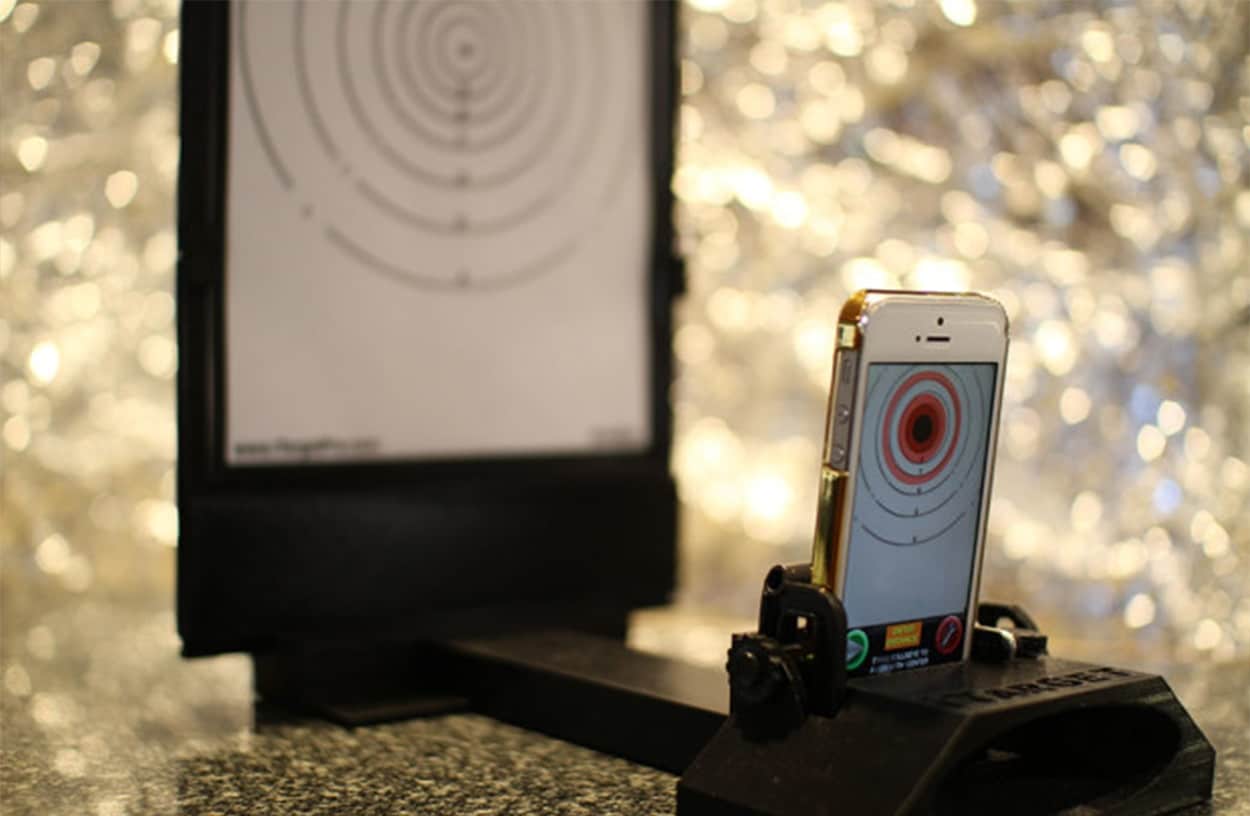 iTarget chose crowdfunding site Indiegogo to market and sell their laser trainer for the iPhone. (Photo by: iTarget)

When Los Angeles Apple developer Joe Crouch set out to bring laser training to the iPhone, he knew funding would be the linchpin to bringing the iTarget project to life. While his idea of a low cost laser training aid was solid, finding money to actually produce it proved tenuous. So, Crouch, like other small businesses, jumped into the crowdfunding craze.

Crowdfunding follows an easy do-it-yourself style of marketing in which small businesses and individuals push their ideas on an online platform. Consumers decide upfront whether to fund a venture, either pledging money or buying into a package. Once funds are secured, production and distribution begin. In a seemingly win-win situation, sellers maintain control over their products while consumers get gadgets at a discounted price.

“I didn’t have to sell shares, take out loans or seek out any investors,” he told Guns.com in an email. “I had an idea, built the prototype and showed it to people who wanted to buy it.”

With 34 percent of small and mid-level business owners transferring personal assets — savings, credit cards and cash — into their business in the second quarter of 2016 fundraising becomes a viable means to stay alive. Pepperdine University, in conjunction with Dun & Bradstreet, found that 19 percent of small businesses and 7 percent of mid-range turned to crowdfunding for capital.

“When we began the study four years ago, small businesses were reeling from the effects of the Great Recession,” Jeff Stibel, vice chairman of Dun & Bradstreet, said in a statement. “It will be interesting to see how the new option of crowdfunding will affect small businesses, as our study has shown more eagerness to use that option as compared to their mid-sized counterparts.”

The cost effectiveness of this type of distribution and marketing was mentioned in nearly all of the conversations Guns.com had with crowdfunded organizations; but the customer experience also proved a compelling reason for conversion to this platform.

Rob Simpson, vice president of Operations at The Gunbox, has offered three of his gun storage solutions up on Indiegogo. Simpson told Guns.com by email that the Sentinel, Gunbox Echo and Original Gunbox have raised a decent amount of money in the company’s eyes, but the most advantageous aspect of the Indiegogo campaigns, however, comes down to the customers.

“Probably the most important (thing) is the free market research and customer feedback we receive by crowdfunding. We have made changes to our crowdfunded projects based off of customer feedback,” Simpson said.

ProSounds mirrored Simpson’s statements. Content Manager Kimball Barker said that even though the hearing protection company is more established now, the value of crowdfunding is a driving factor in keeping their products online.

“For more established companies, it’s less about the money and more about forming a community around your product. It’s about listening to your customers and delivering the products they want,” Kimball told Guns.com. “We’ve never felt closer to our customers and we’re happy to be part of the crowdfunding community.”

In the crowdfunding realm, two contenders reign supreme: Indiegogo and Kickstarter. While consumers can find just about anything on both sites, gun accessories are visibly absent from Kickstarter’s site.

Kickstarter specifically bars individuals or companies from marketing weapons, replicas and accessories. The site heavily enforces its policies, removing and rejecting any campaign that falls into firearm territory. For that reason many gun gear makers turn to Indiegogo for support.

A look at Indiegogo’s terms of use shows a similar list of prohibited items including weapons, ammo and related accessories. However, gun related products and paraphernalia are still readily available.

Oddly enough, Indiegogo shut down a non-lethal Salt handgun campaign in 2015 citing those same terms of use. The product in question propelled the equivalent of pepper spray out of a glorified air pistol.

The Salt campaign was only $30,000 shy of a $70,000 goal when angry Twitter users took to their keyboards demanding the gun’s removal. Indiegogo caved, removing it from the site less than 24 hours after launch.

Salt spokesperson Heath Meyer shared Indiegogo’s explanation to online magazine Inverse: “The Salt campaign has been removed because it did not comply with Indiegogo’s Terms of Use. Our Terms prohibit the offering of ‘any weapons, ammunition and related accessories’ as perks. The Salt campaign was offering the product as a perk. All pledged contributions will be refunded to the contributors.”

Guns.com reached out to Indiegogo for clarification on their terms of use but did not receive a reply by time of publication.

Though the Salt gun suffered the wrath of Internet warriors, iTarget, GunBox, ProSounds and a host of other gear makers are enjoying some online success with this new way to do business.