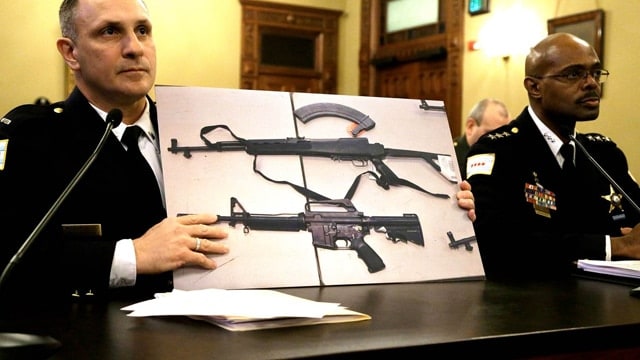 Officials from the Chicago Police Department testifying at the Illinois Capitol on assault weapons in February 2013. (Photo: Associated Press)

Despite calls to renew an assault weapons ban following the country’s deadliest mass shooting, sales of long guns increased marginally when compared to the month of the Newtown elementary school massacre, a high-profile incident that had similar affects on the nation’s psyche.

The industry’s main indicator for gun sales, the National Instant Criminal Background Check System, showed June’s long gun checks jump by 118,000 from last year but amounted to only a third of what transpired in December 2012, a total of 1.2 million checks for rifles and shotguns.

In the week after a gunman with an AR-style rifle and handgun killed 49 people and injured 53 others at a gay nightclub in Orlando on June 12, licensed gun dealers across the country reported a spike in sales, particularly for AR rifles. Many gun sellers told reporters the driving force behind the sales was fear of Congress passing strict firearm legislation.

Since the shooting, Democratic lawmakers and gun control advocates have been pushing to renew an assault weapons ban, and recent public opinion polls have shown majority support for such a measure. Congress passed an assault weapons ban in 1994, when violent crime peaked nationally, but the ban expired in 2004. Public policy makers have since debated its impact.

The public and legislative response has paralleled what happened after the Sandy Hook shooting, in which a gunman used an AR-15 to murder 20 first-graders and six educators on Dec. 14, 2012. Four months after, the U.S. Senate held a vote on a bipartisan measure to expand background checks. The bill gained a majority vote, but fell six shy of advancing.

Gun control legislation in response to Orlando suffered the same fate but more expeditiously. On June 20, the U.S. Senate voted on four measures — two from Democrats and two from Republicans — that aimed to prohibit individuals on government terror watchlists from buying firearms and expand background checks, but many had predicted and then witnessed all four measures fail.