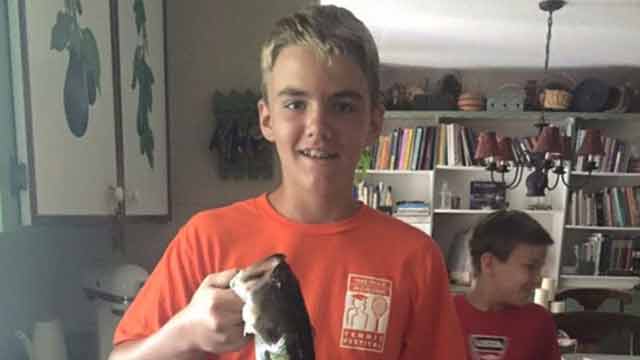 A weekend outing to a Florida gun range ended with tragedy for one family after a 14-year-old boy was accidentally shot and killed by his own father.

According to the Sarasota County Sheriff’s Office, William Brumby, 64, was at the High Noon Gun Range Sunday around 3:15 p.m. when the accident occurred.

Brumby was in the last lane of the firing range, which had a wall to the right of him. When he fired a round from his Ruger SR22, a .22-caliber semi-automatic pistol, the spent casing hit the wall and ricocheted back toward Brumby. The casing, which was still hot, landed in the back of Brumby’s shirt.

While still holding the pistol in his right hand, Brumby brought back his hand in an attempt to get the casing out of his shirt. In the process, Brumby, whose finger remained on the trigger, accidentally fired a round. Standing behind Brumby were three of his seven children, and his 14-year-old son, Stephen, was struck in the neck by the bullet that was accidentally fired. Brumby’s 12-year-old daughter and 24-year-old son were also there, but neither were injured.

Stephen was rushed to the hospital, but was later pronounced dead.

“The gun didn’t kill my boy, I did,” the grieving father later said. Brumby also said that he realized his mistake, his lack of safety, as soon as the shooting occurred, but unfortunately, it was too late.

The sheriff’s office confirmed that witness statements, as well as video footage obtained from the business, corroborated the father’s account of what happened. No charges have been filed against him at this time.

A Go Fund Me account has been set up to help the teen’s family pay for expenses related to Stephen’s death. Donations have already well surpassed the original $10,000 goal.

Stephen was described as “a meteor that couldn’t be contained,” a boy who started shooting about a year and a half ago. He loved all things outdoors, including fishing and archery. He also enjoyed knife throwing, tennis and music. His mother, Elizabeth, said he had an appetite for learning and liked to share his wisdom with others.