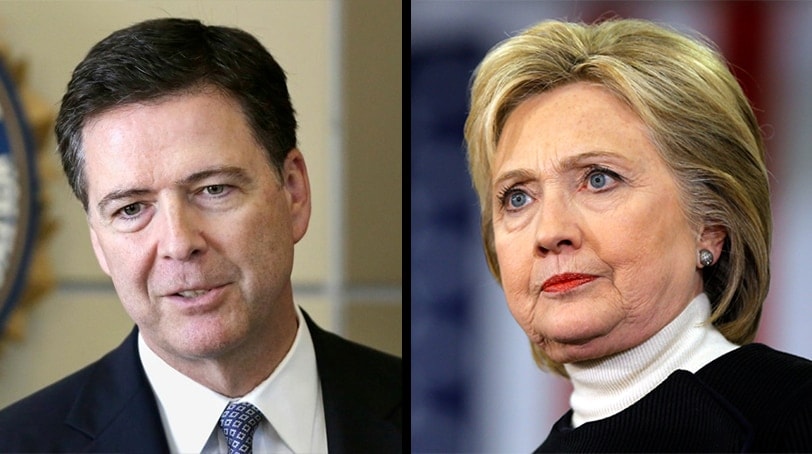 The Federal Bureau of Investigation on Tuesday announced it would not recommend criminal charges be brought against Hillary Clinton for her mishandling of classified information while serving as secretary of state.

FBI Director James Comey said in prepared remarks that while there is evidence of potential legal violations in the handling of classified information through the use of Clinton’s personal email server, no reasonable prosecutor would bring such charges against the presumptive Democratic presidential nominee.

Clinton is expected to receive her party’s nod in about three weeks at the Democratic National Convention in Philadelphia.

“In looking back at our investigations into mishandling or removal of classified information, we cannot find a case that would support bringing criminal charges on these facts,” Comey said. “All the cases prosecuted involved some combination of: clearly intentional and willful mishandling of classified information; or vast quantities of materials exposed in such a way as to support an inference of intentional misconduct; or indications of disloyalty to the United States; or efforts to obstruct justice. We do not see those things here.”

Comey continued, saying that in similar circumstances, individuals could face security or administrative sanctions, but “that is not what we are deciding now.”

“I know there will be intense public debate in the wake of this recommendation, as there was throughout this investigation,” Comey said. “What I can assure the American people is that this investigation was done competently, honestly, and independently. No outside influence of any kind was brought to bear. … Opinions are irrelevant, and they were all uninformed by insight into our investigation, because we did the investigation the right way. Only facts matter, and the FBI found them here in an entirely apolitical and professional way.”

With less than two weeks until Donald Trump presumably receives the Republican Party’s nomination – save for any potential rule changes that could keep him from it – the businessman and reality TV star had some choice words on Twitter for Clinton and the FBI’s investigation.

The system is rigged. General Petraeus got in trouble for far less. Very very unfair! As usual, bad judgment.

The White House said Tuesday the cost of the fight would be paid by the Clinton campaign through the DNC.

“The White House, of course, follows all of the rules and regulations that apply to presidential travel,” said Josh Earnest, White House press secretary, via a pool reporter.

Earnest said while the president and Clinton likely discussed her potential pick for vice president, they didn’t discuss the FBI’s recommendation during the private meeting aboard the president’s Boeing VC-25 on its flight to North Carolina Tuesday morning.

The White House hadn’t received word about the FBI’s announcement, Earnest said, and because the Justice Department hasn’t decided how it will proceed, the White House reportedly remains cautious about weighing in.

“The president is aware of the news,” Earnest said, and remains “enthusiastic about her candidacy.”