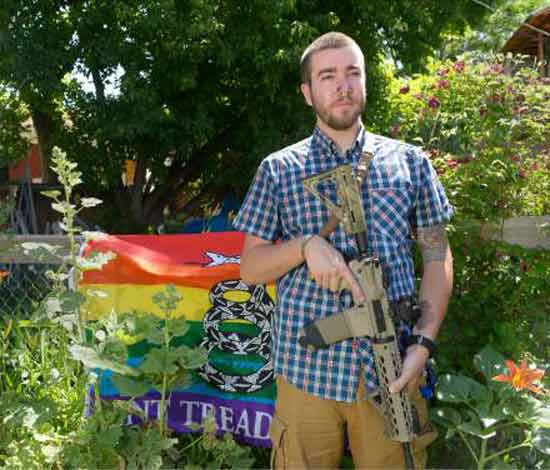 Matt Schlentz stands outside of his home with an AR-15 and a Rainbow-Gadsen Flag. (Photo: Al Hartmann/The Salt Lake Tribune)

In the weeks following the Orlando nightclub shooting, pro-gun LGBT groups have seen an uptick memberships.

National membership for Pink Pistols, a gay gun rights group, hovered around 1,500, said Matt Schlentz, president of the group’s Utah chapter, in an interview with The Salt Lake Tribune. Weeks after the shooting that left 49 dead and another 53 injured, membership has more than doubled to 4,000.

Likewise, Schlentz said various gun range owners have reached out to the group since the shooting with opportunities to help provide firearms and self-defense training.

Shlentz said it’s sad that something on a scale as large as Orlando had to happen in order for some to realize the need for self-defense in the LGBT community.

“The reality is, we still get attacked for kissing our partners or holding hands in public,” he said. “We get windows smashed for having an equality sticker on them.”

Pink Pistols launched 16 years ago following the murder of Matthew Shepard, a 21-year-old gay man who was brutally beaten and tortured near Laramie, Wyoming, in 1998. Shepard died six days later from massive head injuries, but the high-profile case shined a light on safety concerns within the gay community.

Now, the Pink Pistols has active chapters in more than 30 U.S. cities, as well as chapters in Canada and even South Africa. The group thinks “all people have the right to defend themselves from harm, and that everyone has the individual right to keep and bear arms as protected by the Second Amendment.” There are no dues and no forms to fill out to join the group, only a firm belief in the aforementioned statement.

Schlentz said he started learning to use a BB gun with his father at around 3-years-old and now, at 23, has a concealed carry permit and carries a firearm on a daily basis. In fact, he said he owns a semi-automatic rifle similar to the one used in the nightclub murders.

Schlentz called California’s “policing” of gun rights “asinine,” but also admitted that reactions to his own views on gun rights are varied. He said he doesn’t flaunt the fact that he carries a gun, but still, some people, even those who have known him for years, are surprised to learn he does. Some think it’s “really cool,” while others just cast a dirty look when the subject arises. Either way, Schlentz said he respects others’ rights to feel whichever way they choose about the matter.

“Obviously, as a gay man, I have to have some liberal views socially, but on this one point, I have very conservative views,” Schlentz said. “The reality is what it is — the world is a violent, terrible, scary place, and people do wish me harm based on who I love.”