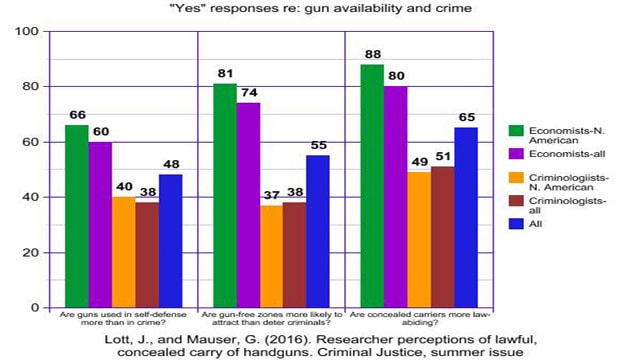 The graph shows a sampling of the findings. (Graph: Guns.com/NCES.ed.gov)

Two academics teamed up to find out if, how and to what extent other academics specializing in economics and criminology differ in their views on guns.

John Lott, Jr., an the founder of Crime Prevention Research Center, and Gary Mauser, professor emeritus in the Department of Marketing at Simon Fraser University, of British Columbia, found stark differences between the two disciplines and some areas of common ground.

Thirty-five economists and 39 criminologists were selected for the study. Nearly all — 91 and 90 percent, respectively, were Canadian or American. Participants were selected based on recent publication of peer-reviewed studies about gun control. Studies had to be published in one of the premier academic journals for economics or sociology (of which criminology is a branch). Studies that were focused strictly on politics or voting were excluded.

Participants completed a short, six-to-11-question survey. Most completed the exercise online in less than three minutes. A few non-responders to the email solicitation provided answers by phone. Data-gathering was done in the late summer of 2014.

Results indicate that economists are more likely than criminologists to believe that in the U.S. guns are used more in self-defense than in crime; gun-free zones are more likely to attract criminals than deter them, and concealed carry permit holders are more law-abiding than the typical American.

Respondents from outside North America were less likely to agree with those statements.

The researchers said that the differences between the views of economists and criminologists coincide with the working assumptions and political climates of their respective fields. Economists, the authors said, see human behavior as motivated by the cost of doing something. For example, as the perceived risk of arrest or incarceration for a crime increases, the likelihood of crime decreases. Criminologists, on the other hand, don’t use an overarching theory of human behavior.

Political affiliations are similar between the two groups, with subtle differences. In both fields, Democrats are a majority. However, at most university economy departments, the ratio of Democrats to Republican faculty is two-to-one, while in criminology departments, the ratio is 37 Democrats for every Republican. The study did not ask political affiliation of respondents, and this is a possible challenge to validity, as Lott and his organization are known for pro-gun viewpoints. Non-responses from 51 percent of criminologists and 30 percent of economists invited to take the survey may indicate responder bias.

Lott and Mauser write that their study is not intended to imply that either profession is more correct in their stance on guns. They do draw the conclusion that the combined opinions closely mirror results of Gallup polls of the average American regarding perceived benefits of guns for household and public safety.