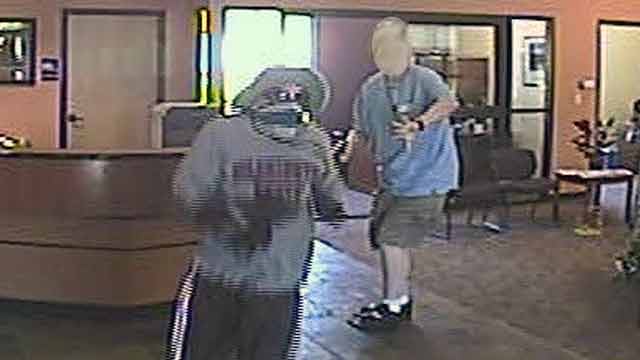 The suspect’s plans were foiled when he ran into an armed patron. (Photo: Spokane County Sheriff’s Office)

Authorities are searching for the man responsible for robbing a Spokane Valley bank at gunpoint last week, and they believe he is likely suffering from a gunshot wound, inflicted by a bank customer who was armed with a gun of his own.

According to the Spokane Valley Police Department, the suspect entered the Spokane Teachers Credit Union around 1:40 p.m. on Thursday, June 30. The suspect, who had his face partially covered with a bandanna and was armed with a handgun, jumped over the counter and demanded money from a bank teller.

But unbeknownst to the suspect, one of the bank customers was also carrying a concealed handgun. The armed citizen drew his weapon and fired a single shot at the suspect, who promptly ran out of the door and fled from the scene on foot.

Within minutes, Spokane Valley Sheriff’s deputies arrived on the scene and set up a perimeter that included two K-9 units, air support and additional law enforcement officers. Despite an extensive search, the suspect was not found.

However, authorities say that witness accounts as well as evidence gathered at the scene, including a large trail of blood, indicated that the suspect was shot by the armed patron.

No one, other than the suspect, was harmed during the robbery.

The name of the armed citizen was not released, but the Spokane Valley Police Department confirmed that he was legally armed. He spoke with investigators on the scene, along with his attorney, and no charges were filed against him.

The suspect is described as a white male, standing approximately 5’8” to 5’10” tall and weighing about 160 pounds. He was last seen wearing a gray sweatshirt with “Washington State University” in red letters on the front. He was also wearing black gloves, black pants with white stripes on the sides, a light colored boonie-style hat and a blue bandanna over his face.

Detectives with the Spokane Valley Major Crimes Division are continuing to investigate the incident, and asking anyone with information to please contact authorities.