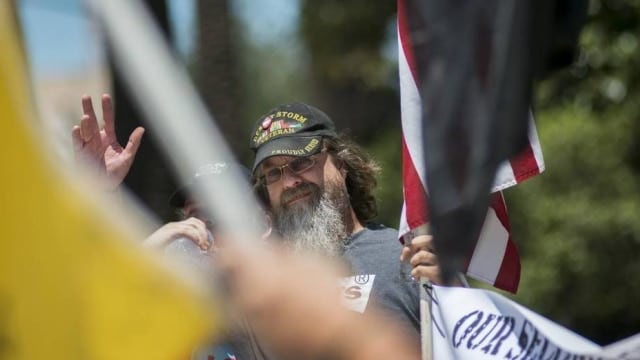 Mel Scott of Chico, who helped organize a non-compliance event in Sacramento last weekend, is among the gun owners not enamored with new restrictions. (Photo: Autumn Payne/sacbee.com)

In the wake of a six-pack of new gun control legislation signed by California Gov. Jerry Brown and an upcoming ballot initiative promising more, some are scrambling for work-arounds.

Last week Brown cherry-picked from a huge legislative package placed on his desk by Senate President Pro Tem Kevin de León, signing six and vetoing five bills before leaving on vacation. Those left unsigned could become law without his signature while the man at the reigns of the state in Brown’s absence, Lt. Gov. Gavin Newsom, welcomed the news as a good start for his own Safety for All voter referendum of gun laws set to be decided in November.

“I’m pleased that the governor took meaningful action to reduce gun violence,” Newsom said in a statement. “Now, with the Safety for All initiative, voters will finally have a chance to take matters into their own hands and keep the momentum going with bold reforms that build on these achievements and go well beyond.”

However, gun rights advocates, who describe themselves in an environment akin to being on the wrong side of the Cold War-era Iron Curtain, are not as cheerful.

“These are constitutionally-illegitimate laws passed by a patently illegitimate government that had the audacity to attack and criminalize millions of its own people in Stalin-esque fashion,” said Brandon Combs, president of Firearms Policy Coalition, in an email to Guns.com. He said legal experts are currently studying the group’s next move and how the laws signed by Brown overlap with Newsom’s looming referendum.

In the meantime, grassroots efforts are afoot among gun owners to simply not bow to the mandates. On Saturday, a group gathered in protest in downtown Sacramento next to a banner that read, “We will not comply.”

Combs said the movement, similar to what has been seen when already strict gun laws in Washington, Connecticut and New York were strengthened, was not a surprise.

“We expect mass non-compliance with these laws and encourage good, peaceful Californians to carefully consider the risks of voluntarily identifying their firearms, magazines, and ammunition to law enforcement officials, especially the California Department of Justice,” he said.

The FPC has gone so far as to post videos from “Radio Free California” with messages to patriots behind enemy lines à la Red Dawn and the World War II French resistance.

Besides outright non-compliance, some gun owners are already looking to legal ways around the new regs. Many have long argued bans on AR magazines that hold 30 rounds of 5.56mm ammunition can be worked around if a gun owner also has a .458 SOCOM caliber gun as the same magazine for that firearm only holds 10 rounds. With Brown again vetoing De Leon’s “ghost gun” legislation, homebuilders can still brew their own variety of ARs without having to register them with the state.

Darin Price, who holds the trademark to the Bullet Button since 2007 that is now facing a ban under two of the new laws, tells Guns.com he has modified his design as the Bullet Button Reloaded, which will be compliant.

Yet, it’s not just static from inside the state at hand. Montana-based AR-15 maker Falkor Defense posted a notice advising they would not sell any firearms, parts or accessories to California Law Enforcement, Agents of the State or First Responders “who hold themselves to be ‘more equal’ than its citizens” while Mississippi black rifle maker Kelly Firearms did the same.

Serbu and other makers established similar policies following the adoption of the New York SAFE Act in 2013.

Meanwhile, with the legal status of Newsom’s ballot measure in question, De Leon has harsh words for its relevance.

“We’ve done our roll,” De Leon told local media. “Any individuals who want to further their own political interests, that’s their own business. But we have taken care of business and as far as I am concerned any ballot measure in the fall is irrelevant.”