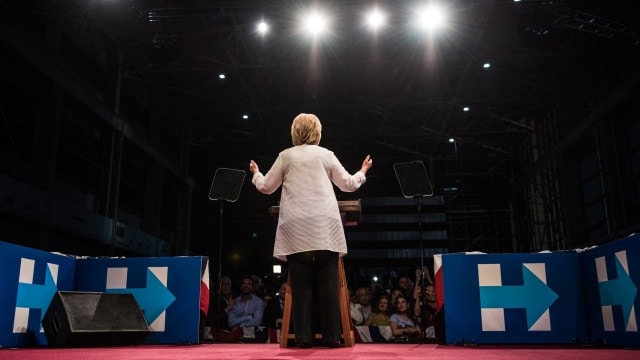 The official party line on gun control varies little from the one backed by the Clinton campaign. (Photo: Hillary for America)

Inside the draft platform proposed by the Democratic National Committee is a gun violence prevention plan to close “loopholes” and take “weapons of war” off the streets and from potential terrorists.

U.S. Rep. Barbara Lee of California, notable for being the only member of Congress to vote against the authorization of use of force following the Sept. 11, 2001 attacks, called the platform she helped craft the “most progressive Democratic Party platform in history.”

There is also, as part of the Party’s efforts to ensure health and safety, an effort to address guns and how they are regulated.

“With 33,000 Americans dying every year, Democrats believe that we must finally take sensible action to address gun violence,” begins the statement. “While gun ownership is part of the fabric of many communities, too many families in America have suffered from gun violence. We can respect the rights of responsible gun owners while keeping our communities safe.”

The cure? Universal background checks, a repeal of the Protection of Lawful Commerce in Arms Act (PLCAA) that insulates the gun industry from spurious lawsuits, assault weapon bans, and legislation such as No Fly/No Buy.

“We will expand background checks and close dangerous loopholes in our current laws, hold irresponsible dealers and manufacturers accountable, keep weapons of war—such as assault weapons—off our streets, and ensure guns do not fall into the hands of terrorists, domestic abusers, other violent criminals, and those with severe mental health issues,” states the platform.

The list mirrors the position taken by presumptive Democratic presidential candidate Hillary Clinton who also advocates closing the “Charleston Loophole,” revoking licenses of firearms dealers found to have high rates of straw purchasers and gun traffickers, and seeking to add those who have been the subject of some outpatient treatments to the list of prohibited possessors.

“Make no mistake about it: The 2016 Democratic platform represents an ambitious, progressive agenda that all Democrats can and should be proud of,” said Clinton senior policy advisor Maya Harris, who was a representative to the platform committee, noting that it “reflects the issues Hillary Clinton has championed throughout this campaign.”

Gun control advocates are pleased with the apparent unified front.

“The strong language drafted in the party platform demonstrates that gun violence prevention is now squarely an issue the Democratic Party will fight for in this election,” said Po Murray, chairman of the Newtown Action Alliance, in an email to Guns.com. “This move is a historic victory for the gun violence prevention movement.”

Second Amendment groups, including the National Rifle Association, have blasted Clinton for years on both her past and current statements on increased gun regulations.

Last week the group released its first TV ad supporting Donald Trump for president, which blasted Clinton for her perceived error in judgement following the 2012 embassy attack in Benghazi, Libya.

The official platform and Clinton’s candidacy will be on the table at the Democratic National Convention, which is set to begin in Philadelphia on July 25.