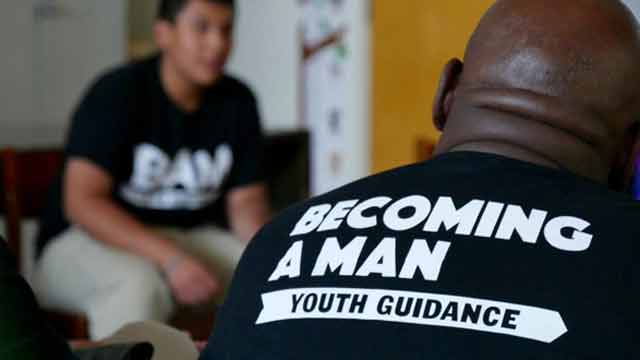 Currently, the program has reached over 2,700 teens at 50 schools in 33 different Chicago communities, but is hoping to expand. (Photo: Ernest Skerrett)

In a city infamous for out-of-control crime, daily shootings and bloodshed, one intervention program has been shown to reduce violence with Chicago’s at-risk youth.

The Becoming a Man program — also known as BAM — was started in 2001, with founder Anthony Ramirez-DiVittorio focused on creating a safe space for teens to open up and express themselves without fear. Additionally, the program helps at-risk youth develop social and emotional skills needed for success and provides a support system, which most of the kids otherwise lack.

The teens have the option of skipping a class to participate in the program, which takes place right in their schools.

“We meet youth where they are, physically within schools and emotionally with nurturing adult relationships, to help form positive youth identities that greatly improve their chances of school and life success,” said Michelle Adler Morrison, CEO of Youth Guidance, the nonprofit that helped develop BAM.

At least one study found that the program is having a significant impact on participants. Researchers from the University of Chicago Crime Lab, Northwestern University, Harvard University and the University of Pennsylvania took a look at how the program affected nearly 5,000 teens. The study showed a 50 percent decrease in violent crime arrests and a 35 percent decline in all other types of arrests among participants. Additionally, the rate of on-time high school graduations increased by nearly 20 percent. But unfortunately, the decrease in arrests stopped once participants cycled out of the program.

Brandon Bailys, who has been a BAM counselor for two and a half years at Roberto Clemente High School, said the program consists of 32 lessons throughout the year, but each session starts the same, with participants sitting in a circle and just talking about whatever is on their minds. Bailys explained in a recent interview with The Trace that many of Chicago’s black youth have the odds stacked against them from birth.

“A lot of people don’t realize that there’s a picture painted of these kids before they’re even born,” Bailys said. “Often when people think of a young man of color in Chicago, they think of violence.”

But Bailys said the program aims to break down those barriers — and often succeeds.

“Every single day, a simple, ‘Hey, how are you?’ is going to add some value to their lives because there are more people who are invested in seeing their success through,” Bailys said.

Bailys explained that part of the success of the program lies in the continual reflection of where the teens are in their lives and what direction they are headed. He said the point of the program isn’t just to graduate and at that point the teen “becomes a man.”