Both sides offer gun control measures in the House 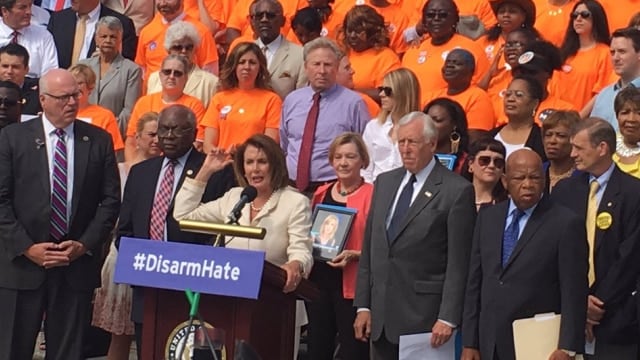 House Democrats mustered alongside gun control advocates on the Capitol steps this week as the body takes on persistent calls for a vote on no fly/no buy legislation. (Photo: Rep. Joe Crowley Twitter)

Returning to Capitol Hill from vacation, both Democrat and Republican lawmakers are offering competing bills to halt gun sales to those on secretive government watch lists.

June ended with House Speaker Paul Ryan sending the body into recess following a 26-hour sit-in protest by chamber Democrats eager to hold a vote on gun control measures in the wake of a deadly terror attack in Orlando that left 49 dead.

Once back in session on July 5, lawmakers lost no time in stumping for their respective causes.

Rep. John Larson, D-Conn., appealed to the House as a whole on Tuesday, saying, “We will no longer be silent,” before he, along with Rep. John Lewis, D-Ga., met with Speaker Ryan in private to appeal for a vote on two Democrat-backed measures on no fly/no buy and expanded background checks.

“We’re asking for a simple vote. After all, that’s what we’re elected to do. We’re elected to represent the people we are sworn to serve and cast vote,” said Larson. “That is why so many took to this floor in an organic movement, demonstrating that we’ve had enough and that we deserve a vote and that we demand a vote for the countless victims and families and ongoing tragedies.”

Ryan reportedly rebuffed the Democrats and instead will offer up a House vote on a Republican no fly/no buy bill similar to that proposed by Sen. John Cornyn that falls far short of what the left is calling for.

The measure, H.R.4237, proposed by Rep. Lee Zeldin, R-N.Y., would allow the Department of Justice to block gun transfers to those on the terror watch list in some circumstances while establishing a burden of proof on the government to preserve due process.

“My proposal with Senator Cornyn in no way, shape or form infringes upon the rights of law abiding gun owners,” said Zeldin in a press conference this week. “What it does is ensure that terrorists do not have the ability to legally purchase firearms. Isn’t that the goal here?”

Zeldin argues that the bill strikes a balance but those across the aisle want more.

“Two weeks ago, House Democrats waged a disruptive and destructive sit-in to shut down Congress because they supposedly wanted to pass legislation that prevents terrorists from being able to purchase firearms. Now they can, with this proposal coming to the House floor, but Democrats are opposing it for no good reason,” said Zeldin.

Minority Whip Steny Hoyer describes the GOP legislation as a non-starter as it has an “unworkable probable cause standard which requires the government to convince a court within 72 hours that the buyer ‘has committed or will commit an act of terrorism’ — not that the suspect has ties to a terrorist organization, or that the suspect is likely to use the weapon against Americans, but that he or she will actually commit an act of terrorism or has conspired to do so.”

Minority Leader Nancy Pelosi met with a group of 91 gun control advocates on the Capitol steps and slammed the GOP proposal as being backed by the National Rifle Association.

Going beyond opposition from chamber Dems, Zeldin’s proposal and that of Rep. Kevin McCarthy, R-Calf., are being sandbagged by the House Freedom Caucus, a group of some three dozen conservative Republicans who are at odds with more moderate GOP members.

“The bill also creates additional constitutional concerns because it does not incorporate the various procedural safeguards in the Sixth Amendment. And, of course, the entire process further supports the disposability of the Second Amendment and Fifth Amendment,” said a member of the caucus, Rep. Justin Amash, R-Mich., this week.

Meanwhile, a group of over 20 grassroots Second Amendment groups including both national and state level organizations, are denouncing any move to implement legislation that denies gun rights without due process as modern day McCarthyism.

In May, a separate collection of groups led by Open Carry Texas went on the record likewise panning no fly/no buy measures, among others.